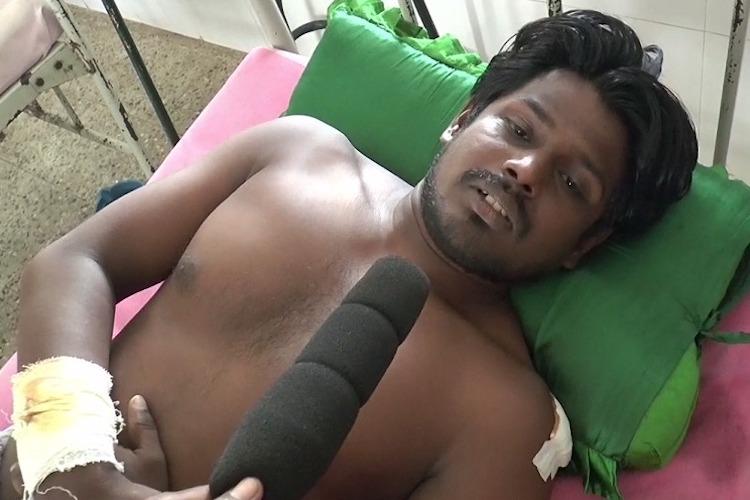 A Muslim man was attacked by a group of Hindutva goons at a village near Tamil Nadu’s Nagapattinam for uploading a picture of himself consuming beef.

24-year-old Mohammed Faizan, a mechanical engineer from Poravachery had posted a picture of himself eating the delicious curry on Facebook on Thursday with the caption, “You can say a thousand things, but beef curry is beef curry”.

Police said that a group of beef hating goons went to Faizan’s house Thursday night and beat him up with iron rods and stabbed him with a knife. The injured Faizan was admitted to a government hospital.

On the orders of District Superintendent of Police TK Rajasekaran, the Kilvelur police registered a case and arrested four people. The accused were identified as Dinesh Kumar, Agathian, Ganeshkumar, and Mohankumar — all in their late 20s. The police have registered cases under various sections, including attempt to murder, of the Indian Penal Code.

According to Faizan, all his attackers belonged to the extremist Hindu Makkal Katchi group.

“After my Facebook post on the beef curry, some members of the Hindu Makkal Katchi opposed it,” The News Minute quoted him as saying.

“They yelled at me saying I can’t eat beef curry. But I insisted it was my right. They then took sickles and rods to beat me. They were wearing masks and only let me go because a police officer came to the spot,” he added.

After news of the attack broke, #Beef4life, #WeLoveBeef and #BeefForLife became the top trends on Twitter, as hundreds of people, especially from Tamil Nadu, began tweeting in support of the freedom to eat beef.

People ask me why I am proud of being tamil. We know how to show resistance to fascist goons, so yes am proud

You did not thrash a Muslim for us, you thrashed a tamil. He IS us. You are not us. #beef4life#BeefForLife #WeLoveBeef

We don’t need to trend it. Nobody tells us not to eat it. We trend #Beef4Life because cow belt sanghis from undeveloped states are trying to impose their brahminism ideas on us. You can keep your Hindu-Muslim bullshit fights to North India, while we peacefully eat beef and pork.

I started eating beef the day these fascists imposed a ban on beef, actually many of us started it only then. The more you impose the more we will rebel. #Beef4life #beef

#beef4life this is how it starts then it becomes and endemic . Do we want to be like Sanghi states? Resist when it begins and put an end to this nonsense https://t.co/4HNJn3Uvay

According to a report from Human Rights Watch, extremist Hindutva groups have killed at least 44 people over the last three years and often received support from law enforcement and ruling party politicians.