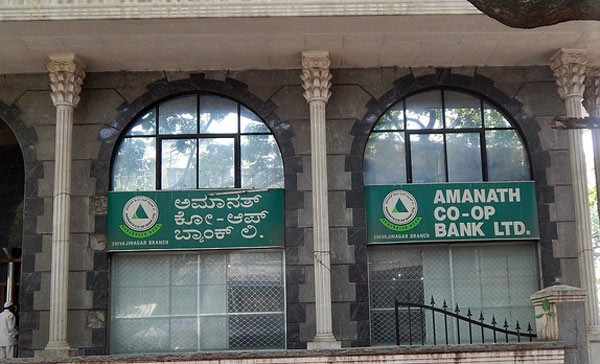 Bengaluru: Days after the ‘Amanath Bank Members Welfare Association’, organised a press conference calling for the merger of the beleaguered co-operative with Canara Bank, and blaming former Union Minister C.K. Jaffer Sharief and his associates for creating hurdles in the process, another camp, this time the ‘Amanath Bank Share Holders and Depositors Protection Committee,’ called on the press to voice their position, against the merger of the bank.

The members also called for the resignation of Mr. Naseer Ahmed, who they accused of protecting the bank’s former board members, who are currently under investigation for misappropriations of funds.

“Instead of filing criminal and civil cases for the recovery of the misapproriation of funds, he (Naseer Ahmed) wants to merge the bank with Canara,” said Syed Iqbal, General Secretary of Karnataka Muslim Muttahida Mahaz (KMMM). He further accused the current management of the Bank, headed of Mr. Naseer Ahmed of “sacrificing interest of innocent bonafide members, beneficiaries, account holders and many others by deducting 33% or more of their hard earned money, there by bringing about a ruination of the bank.”

The members of the committee compared the Bank’s dwindling situation as “loose of pride of the Muslim community”.

“Amanath Bank is the only financial institute which is known for its minority Muslim status, loosing the bank, will be a great loss to the community,” claimed Sardar Ahmed Qureshi, President of Tippu Sultan United Front.

Explaining the committee’s stance, Mr. Qureshi further claimed that, “if withdrawn, this will adversely effect the interest of the public/bonafide shareholders, depositors and even employees and RBD collectors. It will also let the guilty go unpunished and scot-free. Therefore the agitation against the merger”.

According to the committee members, the Bank’s position is strong with, “300 crores of liquid funds, and some 35 crores of gold loan.” They said that a further Rs.100 crores of secured loans is needed for the bank to function normally, and claimed that some influential members of the community, including, C.K. Jaffer Sharief, former Civil Aviation Minister C. M. Ibrahim, and Hothur Iqbal Ahmed, mine lessee from Bellary, are interested in investing in the bank.

As per RBI’s notice, if the merger proposal fails or is delayed, then there is no option left but, the liquidation of the bank, which means the loss of hard earned money for more than two lakh account holders of the bank.

It is not clear, whether the Bank will be salvaged or will be ruined for the self interest of politicians and their camps, but according to close observers of the Bank’s controversial saga for more than a decade, the community at least, will never trust another bank, setup in its name. “And even if the Bank is saved, the account holders will not remain with the Bank,” said one depositor to The Cognate.