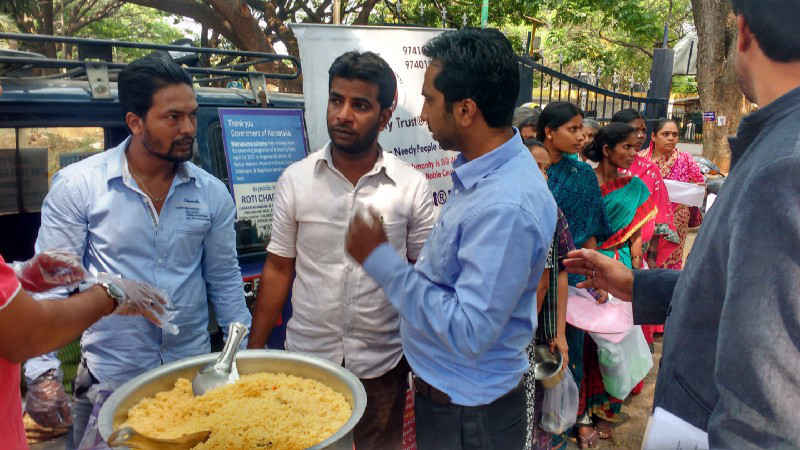 Bengaluru: Across India, one of the most common sights that you will come across is hundreds of people sleeping outside hospitals, with little or no money.

Take AIIMS hospital in Delhi for example. On any given day, you will find dozens of people sleeping in the open outside the hospital or squatting near the AIIMS metro station. These families travel great distances and have to survive in the toughest conditions. But there are many people who also take it upon themselves to ensure that such families get some food to eat on a regular basis.

Normally, one assumes that this work is taken up by rich people with a philanthropic heart. Bengaluru’s Syed Gulab sure has a big heart, but he is nowhere close to being rich, and that is what makes his efforts all the more remarkable.

Gulab got the idea to start the campaign about a year ago, when his niece was admitted to a hospital and the child’s poor parents would remain without food for days, due to lack of money. Gulab says, he witnessed similar instances with other poor families during his visit to the hospital and felt a desire to do something about it.

“The hospital bills are so exorbitant that low-income families find it hard to afford medication and the three times meal at the same time. And to top that, many of these patients come from different parts of Karnataka and elsewhere, so finding affordable accommodation is another difficulty they face,” he says in a conversation with The Cognate.

Gulab’s chance to act on his wish came when he met social activist Azhar Maqsusi of Hyderabad, who has been running a free food camp in his home city since 2011.

Maqsusi is an angelic figure for many poor and destitute in the old city of Hyderabad, who feeds hundreds of people every day. He is a recipient of numerous awards for his humanitarian work, and also appeared in Bollywood star Amitabh Bachchan’s show Aaj Ki Raat Hai Zindagi, where he shared his story of inspiration to the world.

Inspired by Maqsusi and under his guidance, Gulab started serving rice and lentils every Sunday to the families of poor patients admitted in TB Hospital out of his own pocket and was soon joined by friends, who wanted to help him out in his mission.

Faiz Akram Pasha, a social activist working for prison reforms through his Janasadbhawana organization, helped him get an NGO registered, and another friend rented out his house for free to serve as a kitchen.

“It was tough initially because I hardly had money to feed my own family. But due to God’s grace and the generosity of friends and well-wishers, I managed to pull it through”, says the father of three children.

Today, Gulab’s Roti Charity Trust serves close to 200 people every day, earning praise from all quarters. The trust has employed a full-time cook. The cook’s salary of Rs 7,500 per month is managed by the donations the organization receives.

At a recent event to mark the first anniversary of his campaign, Dr. Shashidhar Buggi, Director of Rajiv Gandhi Institute of TB and Chest Diseases offered to become a trustee of the organization, and extended his wholehearted support.

Gulab says it’s a shame that millions of people go hungry every day, while most people throw away leftover food. “I and my team, have taken a small step in tackling this issue. Hopefully, it will have an impact,” he says.