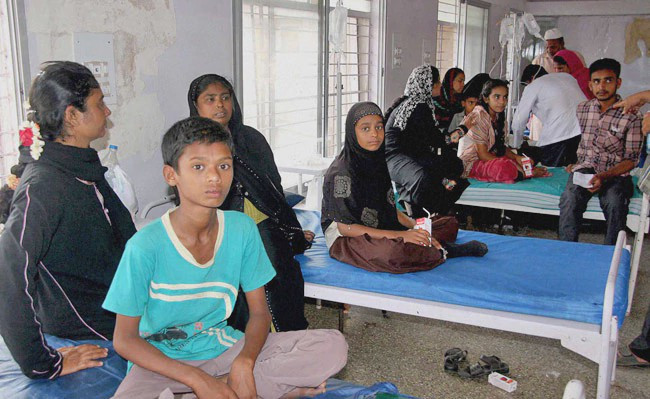 Bangalore: Nearly 350 children of the Government Urdu Medium School (GUMS) in the city’s D.J Halli were hospitalised today, as they fell ill, after having their daily “mid-day meals.” The children were rushed to the close by Dr. Ambedkar Medical College Hospital after some of them started vomiting and complained of stomach pain.

Ms. Asiya, a 8th standard teacher, who spoke to The Cognate, said the children complained of nausea and vomiting soon after they had their lunch supplied by Akshaya Patra Foundation. “When I opened the lid of one of the cauldron, I found a dead lizard in it,” said Asiya, who immediately removed the reptile and stopped the kids from further consuming the contaminated food.

Ms. Zareena, the school Head Administrator, said “the food is checked and tasted by the teachers, before it is served to the children, we are not sure, where and how the reptile came into the closed metal pot.” She said the police have taken the sample of the food to the forensic lab for inspection.

Anxious parents who rushed to the hospital, were agitated by the lack of basic amenities in the school, which they blame for the incident. One parent reported to The Cognate, saying the school does not has a toilet, where many female children study. “There was no water in the school, when our children were vomiting from food poisoning,” said one parent.

Another parent complained that, a lot of boys from the neighbourhood area come to the school to eye on the girls studying in the school. “You say us to send our girls to school, but we fear for their safety. The school does not even has a toilet.” He further said the parents have met the Block Education Office (BEO), and the area MLA many times and have raised the issue, but our concerns have fallen to deaf ears.

Dr. Prasad, who was one of the team of doctors, who attended the children, said “although it is a clear case of food poisoning, but there is nothing serious.”