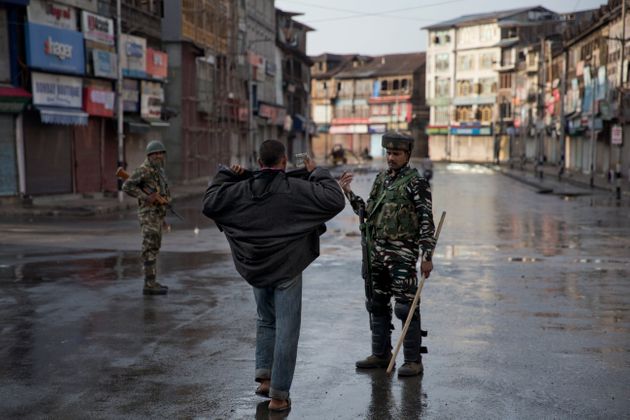 A paramilitary soldier orders a Kashmiri to lift his robe before frisking him during curfew in Srinagar, Kashmir, Thursday, Aug. 8, 2019. Photo: ASSOCIATED PRESS

Days after the Organization of Islamic Cooperation (OIC) expressed concerns over the Centre government’s decision to scrap the semi-autonomous status to Jammu and Kashmir, other international Islamic organisations joined the protest in condemning the unprecedented clampdown on the state and its people.

In a press statement issued on Friday, the International Islamic Federation of Student Organisation (IIFSO) called the government’s unilateral action to abrogate the special status as “provocative” and “careless” and urged the international community to do more to tackle the injustice faced by the people of Kashmir.

“We urge the international community to do more to tackle the injustice faced by the people of Kashmir. IIFSO remains committed to the cause of Kashmiri people,” said Enes Yalman, Secretary-General of IIFSO.

Passed in October 1949, Article 370 of the Indian Constitution, allowed Jammu and Kashmir to have its own Constitution and limited the Parliament’s legislative powers over the state. On 5 August 2019, the BJP-led Central government scrapped Article 370 and imposed martial law on millions of Kashmiris, cutting off the internet and telephone lines, banning journalists and setting a curfew.

The Council on American-Islamic Relations (CAIR), a prominent Muslim civil rights organization, organised multiple protests across the US urging Americans to demand that the US government put pressure on the Indian government to immediately reinstate the special status of Jammu and Kashmir and lift the siege on the suffering people in the valley.

The OIC Secretary-General, Dr. Yousef bin Ahmed Al-Othaimeen, on Tuesday, reaffirmed the OIC’s full support to the people of Jammu and Kashmir in their struggle to achieve their legitimate rights, in particular, the right to self-determination.