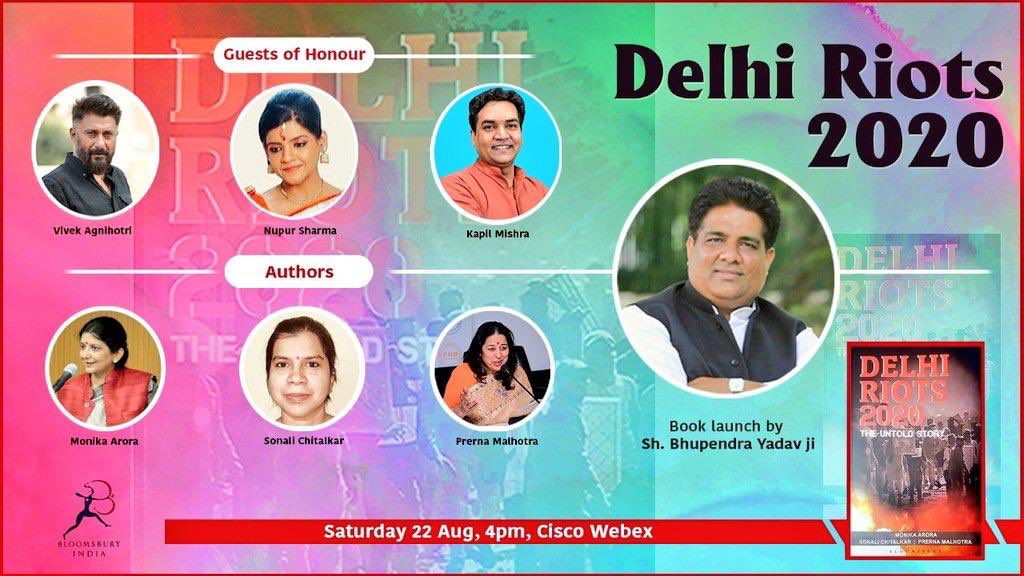 Publishing house Bloomsbury India has been called out for legitimising anti-Muslim hatred and lies and for criminalising the victims of the Delhi pogrom as a book titled “Delhi Riots 2020 – The Untold Story” published by them is slated to be launched on 22 August, with BJP’s Kapil Mishra being invited as a chief guest on its release.

Mishra has been accused of instigating the Northeast anti-Muslim Delhi Pogrom of February 2020, that killed 53 people, mostly Muslims.

Sharing a poster advertising the upcoming book launch, Monika Arora, who has authored the book alongside two others, wrote:

Soon after the announcement by the author, Twitter users lashed out at Bloomsbury for including Mishra in the event, tagging authors who have worked with the publishing house, as well as the main publishing company and its editions in other countries.

Publisher @BloomsburyIndia is releasing a book which seeks to blame minorities for the Delhi Pogrom.

Nupur Sharma of OpIndia & CRIMINAL KAPIL MISHRA OF BJP are guests of honor at the release.

@BloomsburyBooks do you know that @bloomsburyIndia
has published a book on the Delhi 2020 riots that places the blame on the victims? It criminalises the muslim community and seeks to dog whistle to the hindu majoritarian politics currently in India.

Historian Audrey Truschke compared the Bloomsbury’s decision to publish the book of this nature to Nazis blaming the Jews for the anti-semitic pogrom and booksellers profiteering from it.

For those not up-to-date on Indian politics, a rough Western equivalent is this:

Nazis commit a pogrom against Jews, then blame the Jews for it, and an international publishing house platforms and profits from this anti-Semitism@BloomsburyIndia: Do you really want to do this? https://t.co/GTUQPjMNlV

Poet and writer Meena Kandasamy tweeted, “This is not about Cancel Culture. This is about defending literature from fascism. This is about standing up against religious divide, hate speech, islamophobia and false history.”

The literary world must take a stand. This is not about Cancel Culture. This is about defending literature from fascism. This is about standing up against religious divide, hate speech, islamophobia and false history. @BloomsburyBooks

Thank you @persistara for bringing this out

Shame on you @BloomsburyIndia.
This is like publishing Hitler blaming Jews for Kristallnacht. @BloomsburyBooks @BloomsburyPub you shd know what your Indian counterpart is doing. https://t.co/UeuwI1YIAk

facebook changes standards in india to cater to the Modi govt, but this is way beyond, one of the main perpetrators of the violence against muslims in delhi is the guest of honour? from promoting hate to promoting murder @BloomsburyIndia? @BloomsburyBooks @BloomsburyPub? https://t.co/FSUNTcfNPZ

While Bloomsbury India is yet to issue any clarification on Kapil Mishra’s participation in the launch event, on any of its social media handles, despite facing flak, an unnamed representative of the publishing house told Newslaundry that it is not organising this event. “No, the authors did not inform us of this event and our logo has been used without our knowledge. We are not organising any launch event for the book Delhi Riots 2020,” the representative was quoted as saying.

After Bloomsbury India’s clarification was shared online, actress Swara Bhasker tweeted, “I have 2 Q’s. Did u fact check this book? Or did you go by the propaganda and lies the rabble rousing bigots on stage at the ‘book launch’ told u. Why are u publishing this?”

So @BloomsburyIndia has a weak ass explanation/ defence / सफ़ाई। I have 2 Q’s. Did u fact check this book? Or did you go by the propaganda and lies the rabble rousing bigots on stage at the ‘book launch’ told u.
Why are u publishing this? @BloomsburyPub https://t.co/wevjOQRGHi

Other writers also slammed Bloomsbury for publishing the book in the first place.

Book launch is secondary issue m. You are publishing a book of lies. That is the primary reason you are being called out @BloomsburyIndia https://t.co/t8mm2kiLJ5

This is @BloomsburyIndia’s ridiculous non-denial denial. The book, which is blessed by @KapilMishra_IND, who led mobs in the Delhi riots, is theirs; their name is on the flyer. It would be like having David Duke as the guest of honour at an event for a book about Charlottesville. https://t.co/umqTzkGXoJ