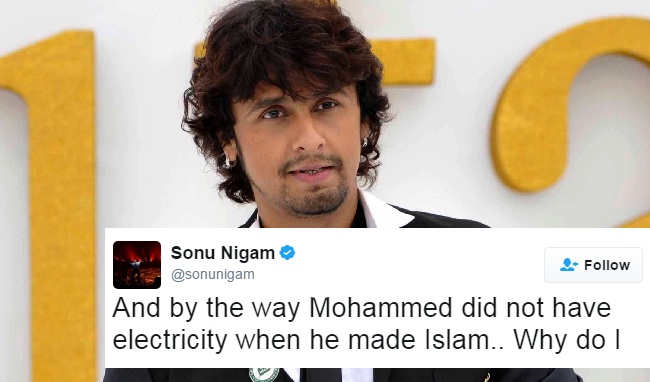 Singer Sonu Nigam, who is currently living in Dubai during the coronavirus pandemic, has deactivated his Twitter account, after his old tweets criticising loudspeakers used for Azaan resurfaced online, prompting many users to call for his boycott in the Gulf country.

Nigam made those comments in 2017 in India after he said he was woken up by the morning ‘Azaan’ from the neighbourhood mosque. “When will this forced religiousness end in India,” the singer had asked.

God bless everyone. I’m not a Muslim and I have to be woken up by the Azaan in the morning. When will this forced religiousness end in India

He did not stop just there. He also invoked the name of the Prophet Muhammad and made a sarcastic remark.

And by the way Mohammed did not have electricity when he made Islam.. Why do I have to have this cacophony after Edison?

He also went on to tweet that he didn’t “believe any temple or gurudwara using electricity to wake up people who don’t follow the religion. Why then?” Honest? True?

At the time, the singer was criticised for his anti-Muslim comments, raising a Twitter storm for and against him.

Those controversial comments have resurfaced again, prompting social media users to tag Dubai Police, asking for action to be taken against him since he’s now temporarily stranded in the UAE during the ongoing national sterilisation drive in the Gulf country.

I request UAE govt to please send Sonu Nigam to India as he does deserve to be in muslim country.
In India, he has problems with his own Indian Muslims over azan.
Deleting Twitter account won't solve the problem. Kick him out. He isn't a citizen there. pic.twitter.com/n4d2bxTqsq

I heard that Indian Singer the coward #SonuNigam has deactivated his @Twitter account after twitter storm against #Islamophobia by Arabian Officials, bcoz #SonuNigam had aslo a problem with #Azan & now is residing in #Dubai he got scared! pic.twitter.com/uuM3bG1PQu

Why can't #SonuNigam be open about his bigotry! 🤣

@DubaiPoliceHQc you immediately arrest #SonuNigam. This has insulted our Prophet. In tweet, tomorrow you will have to answer on the Day of Allah also👇 pic.twitter.com/bi5Ji6HGD5

Sonu Nigam has performed in the UAE and other Muslim countries more than a dozen times over the years, and reportedly his son studies in the UAE, a Muslim country, where Azaan is announced through loudspeakers five times a day.