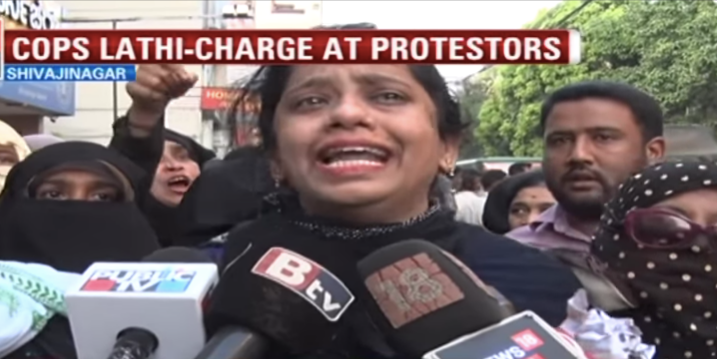 The police used canes to disperse victims protesting outside IMA Jewels in Shivajinagar on Sunday, who were demanding the money they had lost invested in the company.

At least 200 investors, mostly women gathered outside IMA Jewels staging an impromptu protest, taking the police by surprise, as the model code of conduct is in force in the area for the December 5 bypolls to the Shivajinagar assembly constituency. The code prohibits all kinds of protests.

Police asked the protesters to leave the place, but the embittered protesters refused to budge and sat in the middle of the road. They kept raising slogans against the IMA Group’s jailed founder, Mohammed Mansoor Khan, and ex-MLA R Roshan Baig, who is allegedly involved in the scam.

The situation almost got out of hand when someone threw stones at the protesters, leaving a woman with a deep cut in her scalp. The crowd, however, blamed the police that the woman was injured after they lathicharged on them.

Police caned the protesters leaving some of them injured.

According to the police, the protest was the result of a widely circulated WhatsApp message that asked people to gather outside the IMA offices at 5 pm on Sunday and get their money back. Police have opened a case against the person who circulated the message.

“Following the incident, we decided to file a case against those who called the meeting and were spreading rumours to mislead the victims. We are verifying phone call records and messages shared on social media,” Express quoted a senior police officer as saying.

Over one lakh people had invested in IMA, which had floated 17 companies, including jewellery stores infrastructure and real estate development firm, pharmacies, supermarkets etc. The company promoted itself as a ‘Halal’ investment company and attracted a large number of investors from the city’s Muslim community. The company promised investors monthly returns on investments, which it said was ‘Shariah’ compliant.

The scam broke out on June 10, after the group’s Managing Director Mohammed Mansoor Khan, released an audio clip in which he purportedly threatened to commit suicide. In the audio, he had accused former MLA R Roshan Baig of extorting hundreds of crores for him, because of which his company had suffered losses.