How Gau Rakshaks Turned Festival Celebration Into Nightmare For a Muslim Family in Bengaluru
Advertisement https://pagead2.googlesyndication.com/pagead/js/adsbygoogle.js 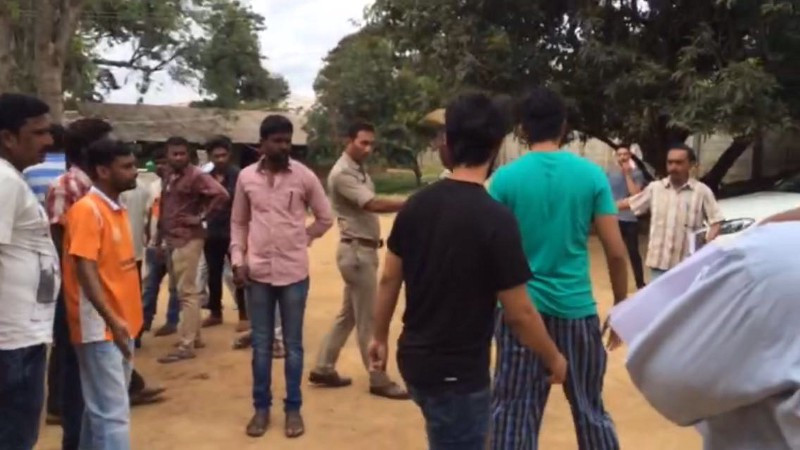 Bengaluru: A Muslim family’s Bakrid celebrations turned into a nightmare, when self-styled cattle vigilantes or gau rakshaks barged into their farmhouse, beat up family members and even threatened to burn them alive, suspecting them of ‘cow slaughter’.

Mohammed Nazeer Ahmed and his family’s ordeal began on Wednesday afternoon when they had gathered at their farmhouse in Jigani on the outskirts of Bengaluru, to slaughter two sacrificial animals, when a group of 4–5 goons forcefully entered their property and began terrorizing them.

Nazeer Ahmed is well known among Bengaluru’s Muslim community as BDA Nazeer Ahmed. He is a former Bengaluru Development Authority (BDA) official and even contested the 2013 Karnataka Assembly Elections on Karnataka Janata Paksha (KJP) ticket. (I have previously interviewed him here)

Waseem Ahmed, the son of Nazeer Ahmed, said that his family had purchased the bulls for sacrifice on the occasion of Bakrid, and as is their practice every year, they had transported it to their farmhouse, where they wanted to slaughter the animal and distribute its meat among relatives, friends and in charity.

Around 2 PM on Wednesday, after the animals were slaughtered, a group of goons forcefully entered the farmhouse and began questioning them about the animals. Waseem says, when his younger brother Fateh tried to reason with them that the sacrificed animals were not cows, they got hold of him and beat him up. Soon a large mob entered the farmhouse and started hurling abuses at the family, and even destroyed property. He said, when his dad called up the police, only one constable turned up, who couldn’t control the mob.

Mustaf, a family friend, says he was repeatedly asked if he was a Muslim, and then beaten up by the mob. He said when the panicked women at the farm, locked themselves inside the house, the mob threatened to pour kerosene and burn the house down.

Waseem says, instead of taking action against the mob for attacking them, the police took him, and the other male members of his family to the Bannerghatta police station, where they were forced to switch off their phones, and made to stay until 11 PM in the night.

He says, the mob had surrounded the police station, and even told the police, under which sections to book a case against them.

According to Waseem, when the women folk back at the farm house, where offering their prayers inside a room in the evening, one police official by the name Murali, derided them saying, “how can you offer prayers, after killing our gods?”

The police has filed a suo moto case under the Karnataka Prevention of Cow Slaughter Act, 1964 against the family, although the family insists the sacrificed animals were bulls and not cows.

As per the 1964 Act, slaughter of cows, calf and she-buffaloes are prohibited, but the slaughter of bulls, bullocks, and buffaloes if they are aged above 12 or if they are no longer fit for breeding or did not give milk is allowed.

“The police has not acted against any of the goons, but has filed a case against us, without even ascertaining if we had actually broken any laws,” says Waseem.

The family has lodged a complaint against the attackers.