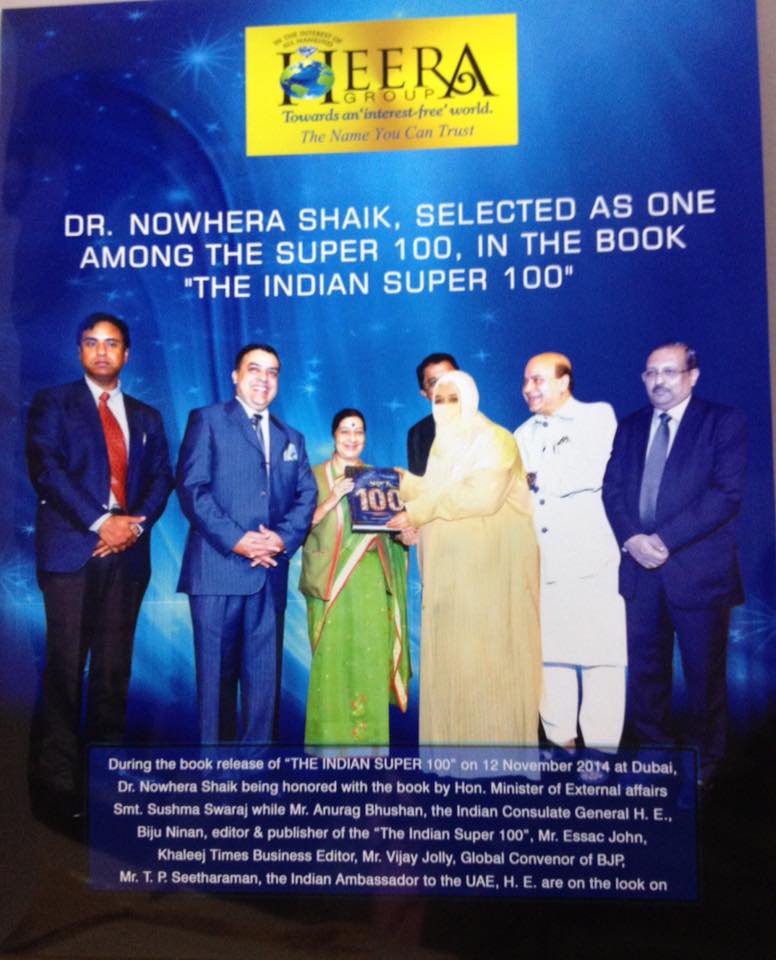 In a promotional video released by Heera Group of companies on its YouTube channel, its now disgraced chairman, Nowhera Shaik is shown hobnobbing with Minister of External Affairs Sushma Swaraj at a book release ceremony held at the Ritz Carlton in Dubai in 2015.

Titled, ‘Indian Super 100’, the book profiles the leading 100 entrepreneurs and professionals from India in the Middle East and Africa. The book does include a profile of Nowhera Shaik, but when you compare the official photographs of the event with those promoted by Heera Group, it is plainly evident that the latter were all photoshopped.

Simply put, Shaik was present at the event, but she never met or got a picture with Swaraj. Her team had faked it.

She is not here

She is not here

For Nowhera Shaik, the quack head of the controversial Heera Group of companies and President of the All India Mahila Empowerment Party (MEP) who was arrested last week on charges of cheating investors, faking photographs and awards is not an anomaly but a standard business practice.

Take for instance her claim of being awarded the ‘Best New Comer Brand’ for Heera Foodex at the Gulf Food Exhibition held at the Dubai World Trade Centre in February 2018. Not only did Shaik claim to have won the award, but her company also released a video claiming to have organised the event.

However, according to Gulfood website, the exhibition is organised every year by Dubai World Trade Centre, and the 2018 edition was its 23rd event.

Heera was only an exhibitor at the event and nothing else.

In 2018, the company again made a false claim and shared a post on its now-defunct Facebook page claiming that Nowhera Shaik had received the ‘Top Business Woman Award’ from Sheikha Hend Faisal Al Qassimi, the Princess of Dubai. But when one Twitter user, checked the same with the princess on the social media site, she replied saying she hasn’t awarded anyone with any business awards.

I take pictures with many people and I attend many events for Indians last year and this year. I haven’t awarded anyone any awards except for orphanages, volunteers and refugee charities. No business awards.

Not only did Shaik employ her deceitful tactics in business, but she also applied them in politics.

During the 2018 Karnataka Assembly Elections, her All India Mahila Empowerment Party (MEP), created a fake survey conducted by a nonexistent agency to predict that MEP will emerge as the second largest party in the elections.

The agency made a ludicrous claim that it had used a satellite to conduct its election survey and even gave details of the satellite, including its position, when it captured the results. From when did satellites start predicting election results? Only MEP and Nowhera Shaik can answer.

Needless to say, the only news agency, which promoted the fake survey, was HNEWS, which is a YouTube channel, owned and operated by Heera Group.

How investors, many of them educated, fell for all this absurdity is beyond belief.

Two weeks after the Supreme Court ordered authorities to unseal offices of scam-hit Heera Gold, to facilitate the company to run its businesses and...