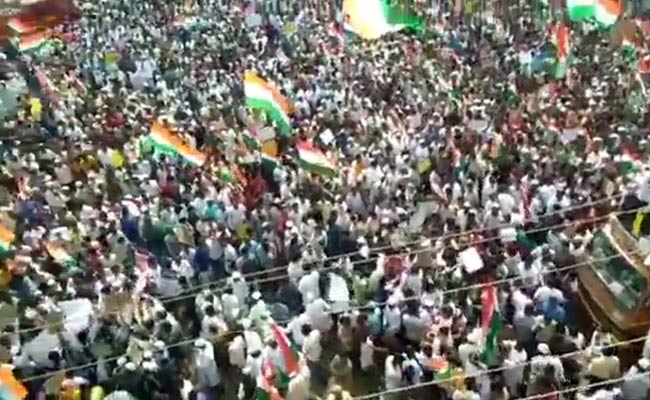 A day after he went on a barking tirade inciting violence against Muslims and anti-CAA protestors, Karnataka’s BJP MLA Gali Somashekhara Reddy was booked for hate speech.

Thousands of protesters from the Muslim community assembled at Ballari’s City, at around 11.30 am on Saturday and demanded that BJP MLA Somashekhara Reddy be arrested for his communally-charged speech.

After the protest intensified, at around 3.30 pm, an FIR was registered at Ballari’s Gandhinagar Police Station against Somashekhara Reddy under section 153A(promoting enmity between two groups on the basis of religion), 295A (Punishment for deliberate and malicious acts that are intended to insult religious beliefs) and 505 B (making statement intended to cause fear, or alarm the public) of the IPC.

A delegation of Congress leaders led by former Chief Minister Siddaramaiah also submitted a memorandum against the extremist MLA in the state Director General of Police office in Bengaluru and demanded he be booked for sedition.

Reddy, the brother of Gali Janardhana Reddy, a former Union Minister and the prime accused in the 2011 multi-crore Ballari mining scam, on Friday, had warned Muslims and anti-CAA protestors of “Hindu wrath” if the community does not stops protesting against the anti-Constitutional Citizenship Amendment Act and National Register of Citizens (NRC).

“This is my warning to you (Muslims), only 5 percent are here (at the event), if you create more trouble, if 100 percent of us come, you should understand what will happen to you,” the hate-spewing extremist legislator had said.

After submitting the memorandum, Siddaramaiah said Reddy made the speech with an intention to instigate communal violence.

“Somashekar Reddy has spoken out what is BJP’s mindset. His speech was directed against a particular community,” he said, adding that the protests against CAA and National Register of Citizens were not limited to any religion.

Congress leader and former Minister for the Haj and Wakf Board B.Z. Zameer Ahmed Khan slammed the bigoted BJP leader of inciting hatred in society and called for his dismissal.

“He (Reddy) is foolish to make such a statement. Who is this 80% and 17% he spoke about? You ask any child in Bellary who is a ‘tapori’ (goon) he/she will say it’s the Reddy brothers. We will go to the DG’s office and submit a complaint demanding strict action be taken against him. He should be dismissed as an MLA. I will also request the Speaker to take action,” Khan said.