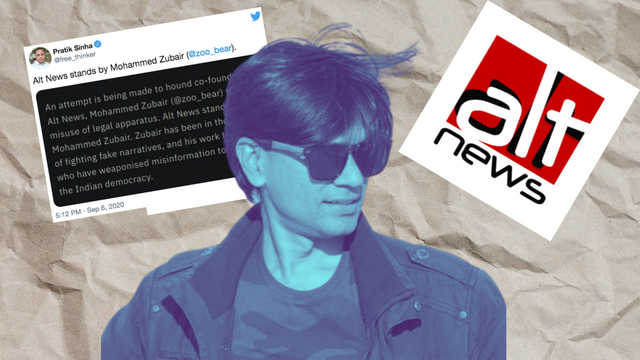 Fact-checking website Alt News rubbished allegations against its co-founder Mohammed Zubair, who has been accused of “stalking a minor girl” on Twitter, and said the first information report (FIR) against him was a “deliberate attempt to target its journalism by misusing legal apparatus.”

Two FIRs have been lodged against Zubair, who on August 6th, responded to one Jagdish Singh, who via Twitter handle @JSINGH2252, used abusive language against him. Zubair posted Singh’s display picture, which features a little girl who is perhaps his granddaughter. He blurred her face in the image posted.

“Hello Jagdish Singh, Does your cute grand daughter know about your part time job of abusing people on social media?
I suggest you to change your profile pic. (sic)”, Zubair had tweeted.

Hello Jagdish Singh, Does your cute grand daughter know about your part time job of abusing people on social media?
I suggest you to change your profile pic. https://t.co/ZUxuOnaI0v pic.twitter.com/SwBe5i6z4k

Speaking to The Cognate, Pratik Sinha, co-founder of Alt News said, “I see it as a deliberate attempt to target Alt News. Zubair was asking a genuine question in response to the abuse targeted at him, and had responsibly blurred out the picture of the girl.”

The FIR’s have been registered in Delhi and Raipur, under the Protection of Children from Sexual Offences Act for the alleged online harassment of a minor girl. The police’s action came after it received a complaint from the National Commission for Protection of Child Rights.

“A complaint of “sexual offence”, coming from someone who has continually used objectifying and demeaning language against women is deplorable, the complainant in the case has used abusive language against Zubair in multiple occasions, this wasn’t the first time” Sinha added.

It must be noted that NCPCR commission headed by @KanoongoPriyank has acted against @zoo_bear on basis of a bogus complaint by @JSINGH2252. Who is this @JSINGH2252? Here's a preview into the vulgar mindset of this person. Is the establishment a voice for such people now? pic.twitter.com/aPfunXHBfq

“An attempt is being made to hound co-founder of Alt News, Mohammed Zubair, through misuse of legal apparatus,” Sinha said in a statement. “Alt News stands by Mohammed Zubair. Zubair has been in the forefront of fighting fake narratives, and his work hurts those who have weaponized misinformation to subvert Indian democracy.”

Earlier on Saturday, Zubair had called the complaint “absolutely frivolous”. “I will be responding to it legally,” he had said.

Twitter users also came out in support of Zubair, pointing that this is what happens to people who stand up to the system.

Goes without saying the work @free_thinker and @zoo_bear are doing @AltNews to bust fake news in India is bound to terrify those operating propaganda machinery to spread the fog of disinformation. We don't need a stronger reason today to support them unequivocally.

I saw the tweet that @zoo_bear is being harassed for. Journalist Zubair literally told a man to not make indecent remarks while posing with his grandkid in his DP. The allegation that he insulted the child is ridiculous. It feels like a Bojack Horseman episode. #IStandWithZubair

AltNews have always been a thorn for those who peddle fake news.

Raise your voice against injustice whenever you see it orelse there will be no one left to raise their voice for you. #IStandWithZubair

As a woman, I feel ashamed that statutory bodies in India are supporting such people, in order to silence the voice of @zoo_bear #IStandWithZubair https://t.co/04X51NhsPS

Alt News is a non-profit fact-checking website founded in 2017 to combat the phenomenon of fake news and is a signatory partner of the International Fact-Checking Network.

National Commission for Protection of Child Rights took cognisance of the alleged doxing, which involves publishing private or identifying information about a particular individual on the Internet after it reportedly received several complaints regarding Zubair’s tweet. Two other Twitter users, with the usernames de_real_mask and syedsarwar20, have also been named in the FIRs.

As many as 120 veterans of the Indian Armed Forces, have written an open letter to the President of India, Ram Nath Kovind, requesting...