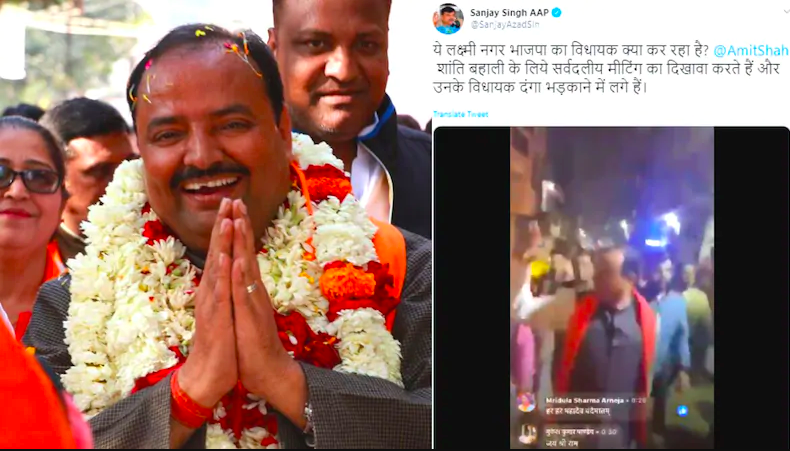 In a video that is doing rounds on social media, Verma is seen leading a group who are heard chanting “Police ke hatyaaron ko, goli maaro saalon ko” (Shoot the people, who murdered the policeman), “Jo Hindu hit ki baat karega, wohi desh pe raj karega” (People who talk about the welfare of the Hindus, they will only rule in the country) and “Jai Shree Ram”.

“What is this Laxmi Nagar BJP MLA doing? Amit Shah, holds all-party meeting, pretending to restore peace and their MLA is engaged in inciting riots,” Aam Aadmi Party (AAP) MP Sanjay Singh said in a tweet while sharing the video on Tuesday.

CNN News18 journalist Uday Singh Rana too tweeted about the incident on Tuesday in his locality corroborating the veracity of the video.

The AAP attacked the BJP for the slogans raised during the march. “Delhi is burning since last 48 hours. Home Minister @AmitShah has completely failed to control the law and order situation of Delhi. BJP Delhi vice-president who’s MLA from Laxmi Nagar can been seen inciting violence in Delhi. Will @AmitShah act?” AAP said in a tweet.

The death toll in Delhi’s worst religious violence in decades has risen to 21 as the police have been accused of looking the other way while Muslims and their properties were systematically targeted.

Both the Supreme Court and Delhi Court have slammed the Delhi police for how it has handled the violence. Justice K.M. Joseph said, “Regarding police inaction, I want to say certain things. If I don’t, I won’t be discharging my duty. I have my loyalty towards this institution, towards this country…”

“The problem is a lack of independence and professionalism in the police. If this had been done before, this situation would not have risen,” Justice Joseph said. He gave the example of the US and the UK and said the police forces there act independently and swiftly when there is a problem.

“Look at how the police act in the UK. If somebody makes an inflammatory remark, they swing into action. They don’t wait for orders. Police should not be looking for here and there for nods,” Bar and Bench quoted the judge as saying.

“I think it’s time all stakeholders in Delhi started lowering their temperatures, their blood pressures. This is not the way society should behave,” Justice Sanjay Kishan Kaul added.