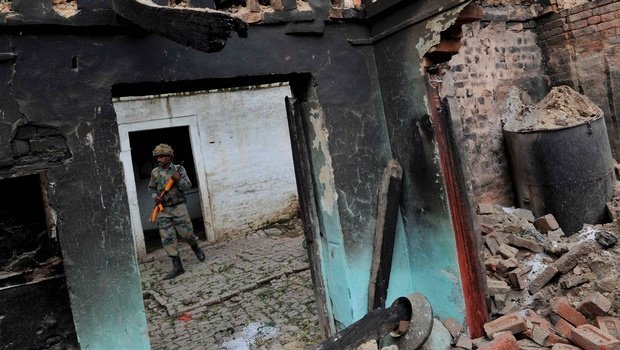 A local court in Muzaffarnagar has acquitted 11 persons accused of setting a Muslim family’s house on fire and robbing valuables during the 2013 riots in Lisadh village in the district. All the accused were out on bail.

Anjum Khan, government counsel, Muzaffarnagar, said, “Additional District Judge Sanjeev Kumar Tiwari acquitted 11 accused on Tuesday in a case related to 2013 Muzaffarnagar riots for want of evidence. Three prime witnesses, including complainant in the case, Suleman, and his two sons — Islam and Azam — did not support the prosecution theory and were declared hostile.”

In his complaint, Suleman had said that on September 7 2013, after the riots broke out 12 persons from his village entered his house shouting insulting and offensive slogans. They ransacked the house and escaped with jewellery, cash and household items. Suleman also said that before leaving, the assailants set his house ablaze.

Fearing for their life Suleman and his family fled to the neighbouring village and took shelter there in a rescue camp. While staying in the camp, Suleman lodged a complaint against 12 local residents and several unidentified persons under IPC sections, including 395 (dacoity) and 436 (mischief by fire or explosive substance with intent to destroy house, among others).

Communal clashes in Muzaffarnagar and adjoining areas in August and September 2013 had claimed the 60 lives and displaced over 40,000 people. The Special Investigation Team (SIT) formed by the state government probed 510 riot cases in Muzaffarnagar and filed chargesheet in 175 cases. The police filed closure report in 165 cases and expunged 170 other cases. Of the total 175 cases chargesheeted, the court has so far acquitted accused in 36 cases.