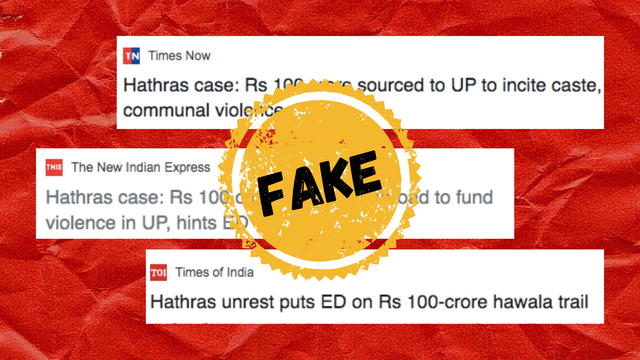 A day after a top Uttar Pradesh government official claimed that Rs 100 crore in hawala money was being routed in accounts allegedly related to Popular Front of India (PFI) to trigger caste violence in Uttar Pradesh, the Enforcement Directorate (ED) on Friday rubbished the reports as untrue.

The ED clarification comes after former Uttar Pradesh DGP Brij Lal, who is also the former chief of UP Scheduled Castes and Scheduled Tribes Commission, alleged that the PFI and its affiliate Campus Front of India became active during the Hathras protests and pumped in Rs 100 crore for instigating riots over the case.

Responding to ED’s statement Anis Ahmed, General Secretary of PFI took to Twitter and asked, “if the media will apologize for propagating a lie? or will they blame the UP govt for misleading the people?”

The Uttar Pradesh police have arrested four people, including a journalist when they were on their way to Hathras district, where the gangrape and brutal assault of a Dalit woman has sparked nationwide outrage. The police claimed “suspicious literature, one that could have an adverse impact on peace,” was recovered from the four. However, police are yet to reveal the content or state the laws the literature violated.

In their statement, police also claimed that the four in custody were linked to the Popular Front of India and its related group Campus Front of India.

PFI has discarded the allegation as being “completely baseless and ridiculous” and an “attempt by the Uttar Pradesh government to divert the attention away from its failure to handle the Hathras rape case.”

PFI was also accused of funding the anti-Citizenship Amendment Act (CAA) protests across India, however, no evidence was furnished to prove the claims.