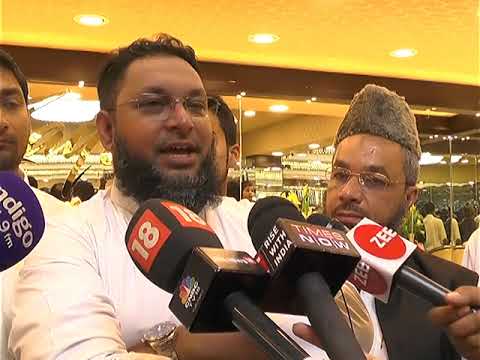 Bengaluru-based financial Company, I Monetary Advisory (IMA) has put down shutters on its offices and its CEO and Managing Director Mohammed Mansoor Khan has reportedly gone absconding, leaving thousands of customers in the lurch.

Customers of IMA were woken up to the rude shock on Monday after an audio message purportedly by Mansoor Khan started getting circulated on social media, wherein he alleged that he is committing suicide, as he had failed to return investors’ money. In the audio clip to the city police commissioner, Khan alleged that many politicians including Shivajinagar MLA R Roshan Baig had extorted hundreds of crores from him, and did not return him the money because of which his company had suffered losses. He also alleged that his family’s life was under threat.

After the audio clip went viral, hundreds of investors turned up in front of the IMA office in Shivajinagar and protested against Khan and demanded that he return their money, which they hadn’t received for the past several months. The company had initially promised to make the payments on June 5th, however, the company declared holiday at all its businesses for Eid. The company was to resume operations on Monday, June 10th.

Police officials have so far neither confirmed nor denied that Khan had committed suicide, but maintained that he was absconding since cases were filed against him by the Central Crime Branch (CCB) and notices were slapped against him for property Forfeiture by the Assistant Commissioner’s office.

Reacting to the allegations against him, MLA Roshan Baig, issued a press release stating, “It has come to my notice that some fake content on my name is being circulated with regard to ongoing issues of IMA Group of Companies. I categorically state that I am neither a stakeholder/partner of this company in any way or form. My association with IMA Group is as a legislator and strictly on the basis of social work that was carried out in my assembly constituency of particularly the VK Obaidullah School in Shivajinagar which accommodates several thousand students from my constituency. There are several contractors and private companies who participate in developmental works of my constituency and not in any way am I a part of any of those companies.

I profoundly request people and my constituents to not pay attention to take forwards and to discard any such false information doing rounds. Let it be known that I have initiated necessary steps before the appropriate authorities to initiate legal action against such miscreants. All those involved in spreading such false information will be taken to task by appropriate authorities.”

IMA, which runs a wide range of businesses, including an investment company, jewellery showrooms, infrastructure and real estate development firm, pharmacies, supermarkets etc., promoted itself as a ‘Halal’ investment company and attracted a large number of investors from the city’s Muslim community. The company promised investors monthly returns on investments, which it said was ‘Shariah’ compliant.

The notice further stated that the Office of the Assistant Commissioner of Bengaluru North Sub-Division had been appointed to forfeit movable and immovable properties of IMA, and its associates, promoters, partners and directors.

“In the name of halal investments, people of our own community have duped us, to the extent that thousands of us are on streets now begging for our own hard earned money. The problem is that we trusted these companies, and this is how they have paid us back,” said Imran Farooq, one of the investors.

In the past one year alone, a number of such companies in Bengaluru have systematically targeted the city’s Muslim community and attracted them to invest in their firms, inducing them in the name of ‘halal’ investment.

In January 2018, Capital Plus and Capital Infrastructure, a firm promising similar high returns on investment duped over 200 investors of over Rs. 300 crores. In September last year, Morgenall another so-called ‘halal’ investment company shut down its office, and the owners went untraceable. Ajmera, Injaz International, Aleef, Aala Ventures, Ambidant, Burraqh, and several other companies have allegedly siphoned off large sums of money.

The extent of their fraud is yet to be ascertained.