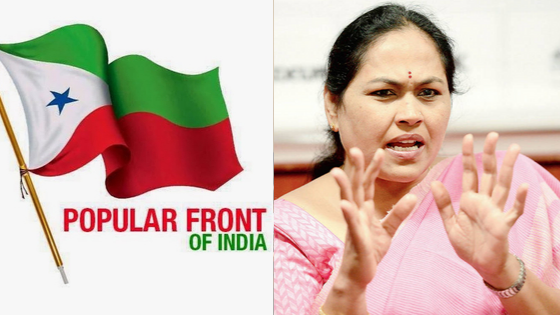 Two days after BJP Lok Sabha MP from Udupi Chikmagalur Shobha Karandlaje termed the Tablighi Jamaat congregation at Delhi’s Markaz Nizamuddin as “Corona Jihad”, and accused the Jamaat of a conspiracy to “spread coronavirus throughout the country”, Popular Front of India (PFI) has said it has decided to file a criminal lawsuit against the parliamentarian.

PFI, at its meeting on Sunday, resolved to file a case against Karandlaje for her statement that the participants of Tablighi Jamat in Nizamuddin, Delhi, have “committed the evil deed of spreading corona and the smell of ‘Corona Jihad’ is being felt behind this.”

Saying that the use of the word ‘jihad’ was a conspiracy to stoke religious tension, PFI state secretary AK Ashraf said, “Our State Committee has decided to file the case. We have to discuss with our legal team how to go about this, under what sections, etc.”

The PFI also issued a statement saying using the word jihad makes the entire community stand as accused, and not just those who attended the gathering in Delhi.

“Shobha Karandlaje has tried to disturb the communal sensitivity of the society even earlier with her provocative words. And a legal action was also taken against her for which she had obtained judicial bail. Once again, a criminal case will be filed against her,” he said.

Karandlaje, who has a history of stoking communal sentiments and peddling fake news, even claimed that some people of Karnataka’s Belagavi district, who were quarantined after they attended the Tablighi Jamaat congregation in Delhi, were misbehaving and spitting at the staff of the hospital, they were lodged at.

However, her claims were rubbished by Belagavi Deputy Commissioner SB Bommanahalli, who said that the Tablighi Jamaat members quarantined in the district were not spitting or misbehaving with health workers.

This is not the first time PFI will be filing a criminal case against Karandlaje. Last year, the organisation had filed the defamation case against Karandlaje following her allegation that Mohammed Mansoor Khan, the I Monetary Advisory (IMA) Group founder and prime accused in the multi-crore IMA scam was funding the organisation, using deposits collected from the public. Karandlaje never submitted any evidence to support her allegation.

The Special Court for the Trial of Complaints against MLAs and MPs had fined Karandlaje for her unfound allegations, before granting her conditional bail.

Karandlaje’s communally surcharged comments come even as Karnataka Chief Minister B.S. Yediyurappa warned to take strict action against those blaming the entire Muslim community for the spread of coronavirus in the country.

In an exclusive interview to TV9, a Kannada channel, Yediyurappa said, “Nobody should speak a word against Muslims. This is a warning. If anyone blames the entire Muslim community for some isolated incident, I’ll take action against them also without a second thought. Will not give an opportunity for that”.

Since the day, Delhi’s Markaz Nizamuddin emerged as a coronavirus hotbed after numerous people who attended a Tablighi Jamaat meet in mid-March tested positive for the viral infection, there has been a deluge of false and malicious claims of Muslims spreading coronavirus in India. Karandlaje’s statement is part of that larger propaganda against the community.