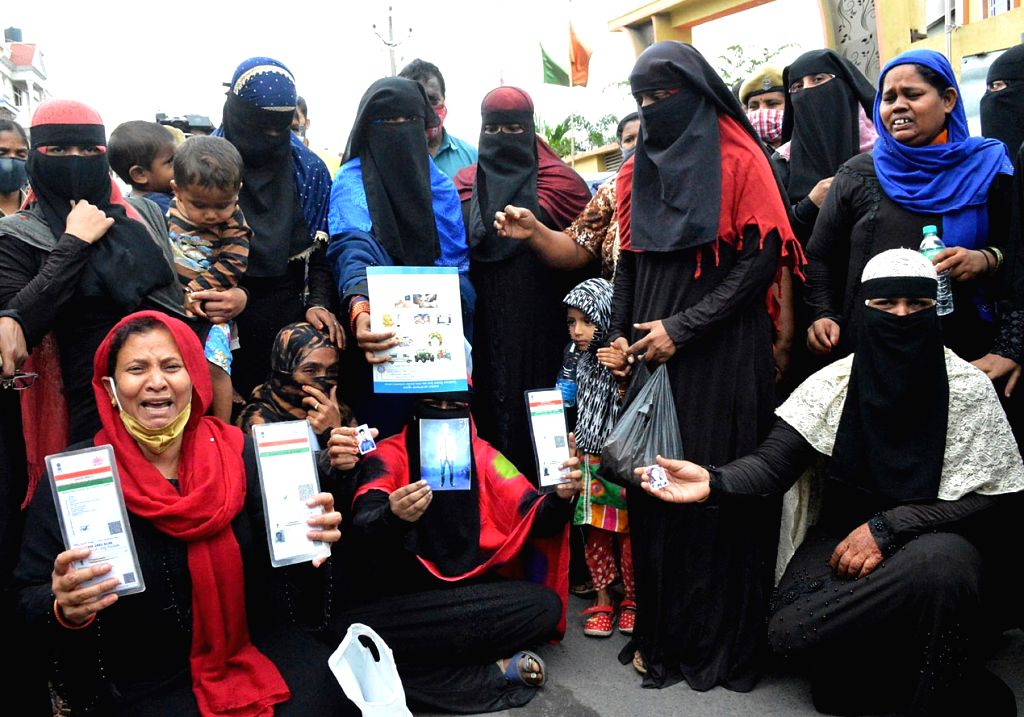 The fact-finding team met the family of 21-year old Yasin Pasha who was shot on August 11. According to medical reports a bullet entered his forearm and went through his abdomen. The police say he died on the spot. The family says, “Our son was innocent. He had done nothing. He was just on his way home. We have lost him. If that is not enough they have put a slew of cases on him. We will fight it. First, they killed our boy and now they are trying to destroy his name. We will challenge them”. They go on to say, “Justice has died. The government is theirs, the police are theirs. Whom should we go to? Who will give us justice?”.

24-year-old Syed Nadeem was one of those who were injured in the police firing on the night of August 11. They said, “At around 12.20 we got a call saying that he has been shot and some members of the public have taken him to Ambedkar hospital. We rushed to the hospital and found that he had been shot – there was a wound in his side and on his hand like a bullet had gone through”. The doctor told them that an x-ray was needed and asked the family to make the payment. On looking at the x-ray, the doctor told the family that there was no bullet inside and it was just a wound, which he then stitched up. Nadeem’s mother said, “But my boy was complaining that he felt that something was still lodged inside. And he said he was in deep pain. We believed the doctor and went to get some medicine”.

We thought that since the doctor said he was alright we would pay the bill and then pick him and take him home. But the time we went back we saw that he was not in his bed. The police had arrested and taken him away”.

On August 12 Nadeem’s mother went to the police station to get information about her son. She said that there were a lot of women around all of whom were being chased away by the cops. The family said that till August 15, they did not know where their son was. They said, “At 5.00 pm on August 15, we saw his photo in the news and they were saying that he was dead”.

On hearing of his death, the family immediately went to the hospital where the doctors told them that Nadeem had contracted Covid-19. They said, “He was absolutely fine on August 11. He did not have symptoms then how could he have died of Covid-19 in just a few days? We saw that there were stitches on the side of his body. We think that maybe there was some metal in his body which they did not detect during the x-ray and maybe that is how he died”. On asking to see the death report, the family said,” neither Ambedkar hospital nor Bowring hospital gave us any documents. We do not have anything to show what could have happened to him. We do not even have his death certificate”.

The fact-finding team also met the mother of Sheikh Sadiq, who was absolutely inconsolable over the loss of her young son. She has lost her husband and has another son and a daughter both of whom are married. Her older son is suffering from cancer and lives separately with his family. Her daughter is expecting her second child and is in the final stages of pregnancy.

Sadiq’s mother depended on him for running the house and for shouldering social responsibilities like taking care of his pregnant sister. Sadiq used to drive an auto. During the lockdown, the family faced a serious financial setback. On August 11, Sadiq had gone to visit his maternal uncle who lives near the D.J. Halli Police Station. His mother said that he did not come home all night. She had left the door of the house open, not being sure when he would come home.

The next day before noon, the family received photos of a person who was killed in the firing the previous night. That is how the family got to know that Sadiq was one of the three persons who succumbed to police bullets the previous night. He had been hit in the chest. Sadiq’s mother said, “If they wanted to disperse the crowd they could have shot at the legs, why kill them? If they had been injured in their leg, they would recover. Where will I get my boy from now?”. A resident of the locality who was present said that Sadiq was an innocent boy. He was only concerned with his work and home. He also said that this family has indeed seen too much suffering and that this was something that the family would find it difficult to emerge from.