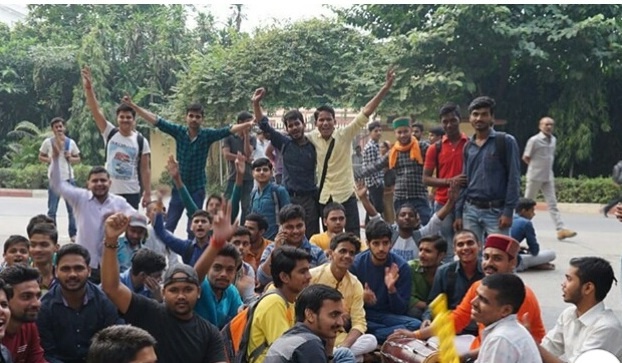 Students demanding the cancellation of the appointment of a Muslim professor in BHU. Photo: TOI

A Muslim assistant professor’s appointment in the Sanskrit department of Banaras Hindu University (BHU) has triggered protests among students, who are demanding his dismissal for being a ‘non-Hindu’.

The appointment of Firoz Khan as an assistant professor in the Sahitya (literature) department of the Sanskrit Vidya Dharm Vigyan of the Central University (SVDV) was vehemently opposed by a section of students, who staged a sit-in at Holkar Bhawan near vice-chancellor’s residence on the varsity campus from Thursday.

The protestors, in a letter to the BHU vice-chancellor Rakesh Bhatnagar, have claimed that the varsity’s founder, the late Madan Mohan Malviya had termed the SVDV faculty as the heart of the varsity.

“The stone plate of the faculty also contains that this institution is for cultural, religious, historical debates and discussion of Sanatan Hindus and their direct or indirect branches like Arya Samaj, Buddh, Jain, Sikh, etc.”, the letter pointed out.

The protestors said that despite knowing all these facts, a ‘non-Hindu’ has been appointed, which seems to be a conspiracy. They allege that as the new appointment is against the soul and spirit of the institution, it should be cancelled immediately.

However, the BHU administration has made it clear that “the appointment has been made as per the University Grants Commission (UGC) rules and the BHU Act in a transparent manner based on the eligibility of the candidate”.

As per the BHU website, the SVDV faculty was established in 1918 by Malaviya “in order to materialise the chief goal of this university, which is to preserve and promote the studies of Ancient Indian Shastras, Sanskrit language and literature with the intention to bring about a fruitful dialogue between the East and the West.”