Babu Bajrangi, The Terrorist Who Was Convicted For Killing Muslims In Gujarat In 2002, Granted Bail By Supreme Court
Advertisement https://pagead2.googlesyndication.com/pagead/js/adsbygoogle.js 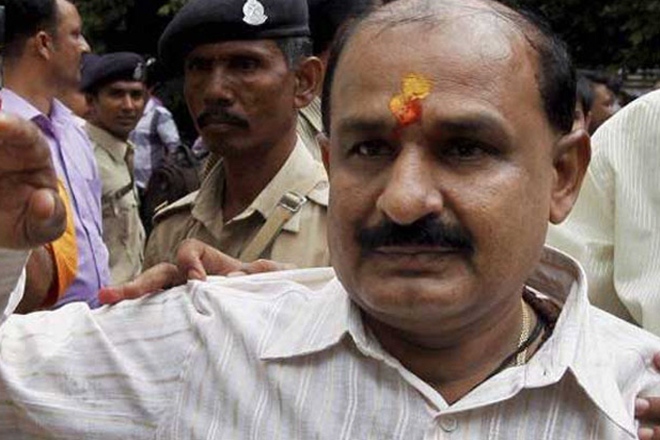 The Supreme Court on Thursday granted bail to Bajrang Dal terrorist, Babu Bajrangi who was convicted in the 2002 massacre in the Naroda Patiya area of Ahmedabad, in which 97 Muslims were killed in broad daylight.

Bajrangi had been serving a life sentence in the case, which occurred during the 2002 anti-Muslim genocide in Gujarat.

His bail comes weeks after the Gujarat government informed the Supreme Court, in reply to a bail plea that Bajrangi had filed last year, that he was “in bad shape”. The state told the court that Bajrangi has allegedly suffered complete vision loss, besides various other ailments.

On April 20, 2018, the Gujarat High Court had also acquitted 17 others, including former BJP minister Maya Kodnani, who was one of the prime accused in the Naroda Patiya massacre.

Bajrangi, the then state convenor of Bajrang Dal had led a mob of Hindutva terrorists, who burnt alive local Muslims and raped women in the Naroda Patiya.

Bajrangi himself had hit a pregnant Muslim woman, Kausar Banu, with a sword, and boasted later in a sting operation that he had taken out her fetus on the tip of his weapon, and then burnt her body. Although the court dismissed Bajrangi’s own admission of removing her fetus, it found him guilty of the cold-blooded murder of Kausar Banu.

His bail by the Supreme Court today received sharp criticism from people, who believe it is unjust to let loose a convicted terrorist, who massacred Muslims in one of the worst riots in India.

This is horrifying.
The Butcher of #NarodaPatiya now out on bail, instead of spending his life in jail. #BabuBajrangi #Gujarat2002 #GujaratCarnage https://t.co/DqpCDJyf9U

First Maya Kodnani and now Babu Bajrangi, who too led mobs. 97 died in Naroda Patiya. Why is there seldom justice for those who need it the most?
https://t.co/4ngCyFm2TF

*Secular Democratic India is the Greatest Country in the world*

If you're a Hindutva Terrorist who kill Muslims,rape Msulim women,then you will enjoy absolute impunity here.

This Convicted Terrorist Babu Bajrangi who confessed to kill/rape many Muslims,got bail today

Today the Terrorist Babu Bajrangi who killed pregnant Muslim woman and took out child from her womb and put it on sword during #Gujarat2002Riots at Naroda Patia released on bail from Supreme Court.

"Salute" to this "Independent" Judiciary and their "Justice".😡😡

While terrorist Babu Bajrangi got bail after killing 98 Muslims, let us think about those Muslims who r languishing in Jail. Muslims make up 15.8% of all convicts and 20.9% of all undertrials in jails across the country. This is higher than their share in the country’s population

Babu Bajrangi gets bail unopposed.
This man on camera has admitted ripping pregnant women's womb & dragging the foetus with sword. Modiji wanted to protect Muslim 'sisters' championed #TTbill & his Govt did not oppose the bail for man who has raped and murdered many Muslim women. https://t.co/3ESZqA84Ko

One more terrorist came out before elections! https://t.co/INcSYTjGHs