Attempts To Tarnish Our Image, By Falsely Linking Us To Tanveer Sait Attack: SDPI
Advertisement https://pagead2.googlesyndication.com/pagead/js/adsbygoogle.js 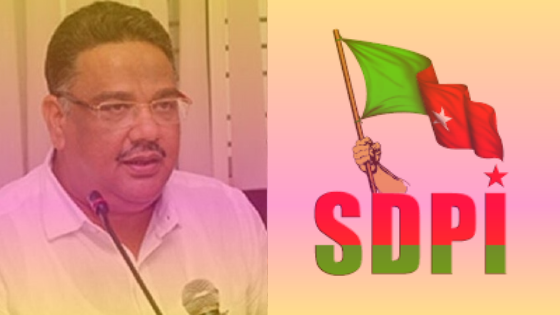 Mysuru: Social Democratic Party of India (SDPI) has rubbished the allegations made by sections of media and political parties linking the organisation to the attack on Congress MLA and former minister Tanveer Sait. At a press conference in the city today, SDPI said the allegations are an attempt to tarnish the image of the party by ‘spreading falsehood’ and ‘concocting lies’ by people with vested interests.

Tanveer Sait, who is MLA from Mysuru district was stabbed with a knife on late Sunday night when he was attending a wedding ceremony in Mysuru. Sait was rushed to a private hospital and is said to be out of danger.

Soon after the incident, both the Congress and BJP pointed fingers at SDPI, alleging that the attacker, identified as 25-year-old Farhan Pasha was a member of the party.

“We have been observing that there are some evil attempts to connect the Mysore incident to SDPI. We clarify here that there is no connection between SDPI and Mysore incident. SDPI is growing across the nation as an alternate political party with the dream of building a popular, secure and equally developed society.” a press statement from SDPI said.

Calling the attack on Sait as an ‘unacceptable’ and an ‘unpardonable’ act, SDPI alleged that some political leaders are misleading people by politicizing the entire incident.

“It’s the habit of BJP and Congress to politicize any incident and diverting it to their benefits,” the party said.

The party also slammed sections of media for dragging its name in the attack.

“SDPI Condemns the attempts of some vested media which are spreading false reports and rumours to mislead the people while the police investigation is in process. This is against the ethics of journalism. We urge the media to know their responsibility and impart their duty honestly without dereliction to the morality of journalism,” it said.