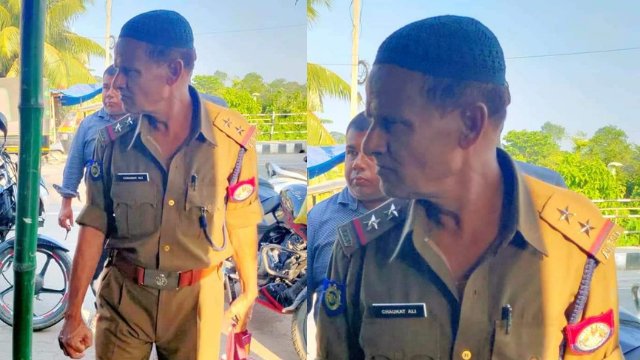 A Muslim sub-inspector of Assam Police Radio Organisation (APRO) was suspended by the Assam police for allegedly wearing a skull cap while on duty, saying that it violated the Uniform Rule.

The suspended sub-inspector has been identified as Md Choukat Ali. He was suspended after a picture in which he was seen wearing a skull cap went viral.

ADGP S N Singh told Inside Northeast that the Ali’s photo was clicked in Amingaon. “He says that he forgot to take off the cap after offering Namaz. However, there is reason to believe that he was totally being honest. He was posted at the Message Coordination Centre in Dispur. He was suspended for the breach of the uniform code, which is a very serious violation.”

In an order issued on last week by the Superintendent of Police (Communication), Headquarter-II, “SI (Opr) 198331837 Md. Choukat Ali of APRO, MCC, Dispur is hereby placed under suspension with immediate effect until further order, for his indisciplined and unbecoming conduct, as he willfully violated the Uniform Rule which is serious indiscipline.”

The order also stated that Md Choukat Ali has been shunted to the reserve branch of APRO headquarter, Ulubari in Guwahati, India Today reported.

A departmental inquiry has also been ordered against the sub-inspector for violating uniform rules. He has been served a show cause notice in the matter.

“Department proceeding is also drawn up against him under section 65 of Assam Police Act 2007 read with rule-66 of Assam Police Manual Pt-III and Article 311 of the Constitution of India and rule 7 of Assam Service (Discipline and Appeal) Rules 1964 for his indisciplined and unbecoming conduct, rendering him until retention in the Police Force,” said the order.

However, many took to social media expressing that the sentence is too harsh.

All rules are reserved for Muslims only in India.https://t.co/w4S0XRfUm3 pic.twitter.com/gYPa1PbEdi

A Muslim journalist Gazala Ahemed was denied job for wearing Scarf.#Islamophobia_in_india is on its peak. pic.twitter.com/zYAix2yNfW

In a similar incident that occurred in October in Uttar Pradesh, a Muslim police officer was suspended from duty for growing a beard allegedly without the permission of the department. The officer, Sub Inspector Intizar Ali was reinstated to service after he shaved his beard off.