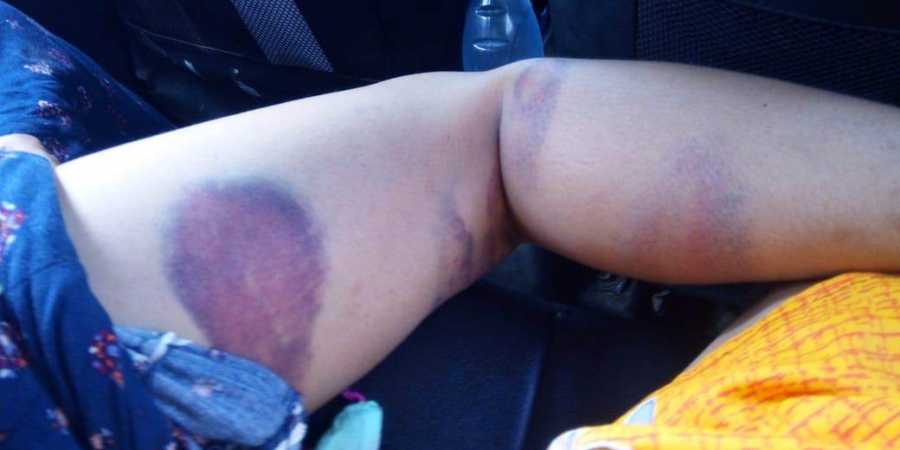 Bruise marks on one of the victims of alleged police brutality. Photo: New Indian Express

In a gruesome incident, a pregnant Muslim woman and her two sisters were allegedly stripped and tortured inside a police station in Assam’s Darrang district. Kicked in her stomach by a police officer, the pregnant woman started bleeding and lost her baby due to the torture.

According to reports, Darrang district police picked up three sisters – Minuwara Begum, Sanuwara and Rumela from Sixmile area in Guwahati on September 8 night in connection with a kidnapping case and took them to Burha police outpost.

In a complaint filed with the Darrang district Superintendent of Police on September 10 by Minuwara Begum, she has alleged that the three of them were picked up from their homes by a police team led by the officer-in-charge of Burha police outpost, Mahendra Sarma, on September 8 night.

In the complaint, the sisters alleged they were beaten brutally and stripped naked on gunpoint by the police in custody

“We were brutally beaten up with sticks. My pregnant sister had pleaded to spare her as she was carrying a baby in her womb but Mahendra Sarma said we were acting. She lost the baby due to the assault,” the sister of the expecting mother was quoted as saying by The New Indian Express.

However, the police claim that a Hindu girl was kidnapped by a Muslim man, and the three sisters were picked up in connection with the case.

“This is a heinous crime which cannot be tolerated in a civilized society. We will send a notice to the Darrang SP,” she said.

Meanwhile, the state’s Director General of Police Kuladhar Saikia has ordered a probe into the case.