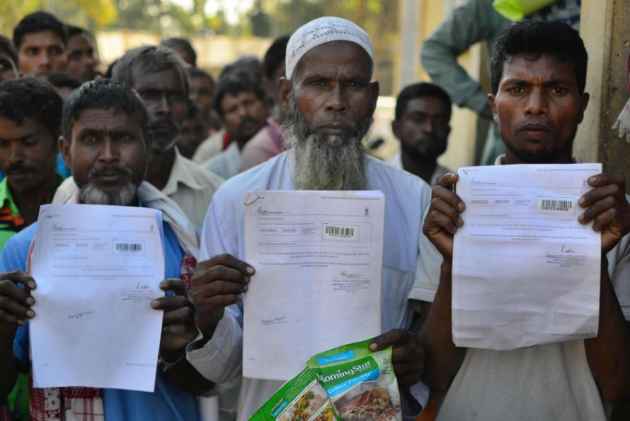 The Assam Police on Thursday registered an FIR against 10 poets and activists, most of them Muslims, over poems depicting the fears, persecution, and violence faced by the Muslim community in the state, under the pretext of citizenship proof. The poets, who write in a dialect colloquially called the ‘Miya’ dialect have been booked under section 420/406 of the IPC read with various provisions of the Copyright Act.

“Yes, an FIR has been registered today. No arrests have been made yet,” Dharmendra Kr Das, Deputy Commissioner of Police, Guwahati Central, was quoted by The Indian Express as saying.

The complaint, filed by one Pranabjit Doloi, says the poems, circulating on social media, “defame” the people of Assam and “may obstruct the process of NRC”. “The accused person’s intention is to depict a picture of Assamese people as xenophobic in the eyes of the whole world, which [is] a serious threat to the Assamese people, as well as, towards the national security and harmonious social atmosphere. The real intention of this poem is to motivate and provoke their community against the system,” the complainant said.

The powerful poems — “My Mother’s Name is D Voter” by Ashraful Hussain, “Write Down I Am Miya” by Hafiz Ahmed, “I Am Miya” by Rehna Sultana, “How Many More Days” by Abdul Rahim and “That Land is Mine” by Kazi Sharowar Hussain — talk about the question of citizenship, in the wake of NRC.

Here’s one of Ashraful Hussain’s poem:

“Write.
Write down
I am a Miya
My serial number in NRC is 200543
I have two children
Another is coming
In the next summer,
would you hate him
As you hate me?

Write
I am a Miya
I turned waste, Marshy land,
To green paddy field,
To feed you,
I carry brick
To build your building,
Drive your car
For your comfort,
I clean your drain,
To keep you healthy.
I have always been
In your service
Even then
you are dissatisfied!

Write down
I am a Miya,
A citizen of a democratic, secular, Republic
Without any right,
My mother has been made a D voter,
Though her parents are Indian,
If you wish you can kill me, drive me away from my village,
Snatch away my green field,
The Roller of you
Can roll over me,
Your bullets
Can shatter my breast,
Without any punishment.

Write
I am a Miya
living on the Brahamaputra
Tolerating your torture,
My body has turned black,
My eyes red with fire.

Be Aware!
I have nothing but anger in stock.
keep away!
Or
Turn to Ashes.”

Along with the above-mentioned poets, the following persons have been named in the complaint — Shalim M Hussain, Karishma Hazarika, Abdul Kalam Azad, Banamallika Choudhary and Farhad Bhuyan.

The case was booked against the poets and activists even as the exercise to update the National Register of Citizens (NRC) entered its last stages. The final list will be published on July 31. The stated aim of NRC is to separate ‘genuine’ Indian citizens from undocumented immigrants living in the state. According to the terms, anyone who cannot prove that they or their ancestors entered Assam before midnight on March 24, 1971, will be declared a foreigner.

However, human rights activists, including experts from the United Nations have warned against the implementation of NRC, arguing that it could create instability and make millions of citizens stateless in India.

“We are seriously concerned over the current implementation of the NRC update in Assam and its potentially far-reaching consequences for millions of people, in particular, persons belonging to minorities who risk of statelessness, deportation or prolonged detention,” the UN experts have warned.

“Do we not have the right to write a poem on genuine citizens being marked Doubtful voters or being sent to detention camps?” asked activist Abdul Kalam Azad, reacting to the FIR.