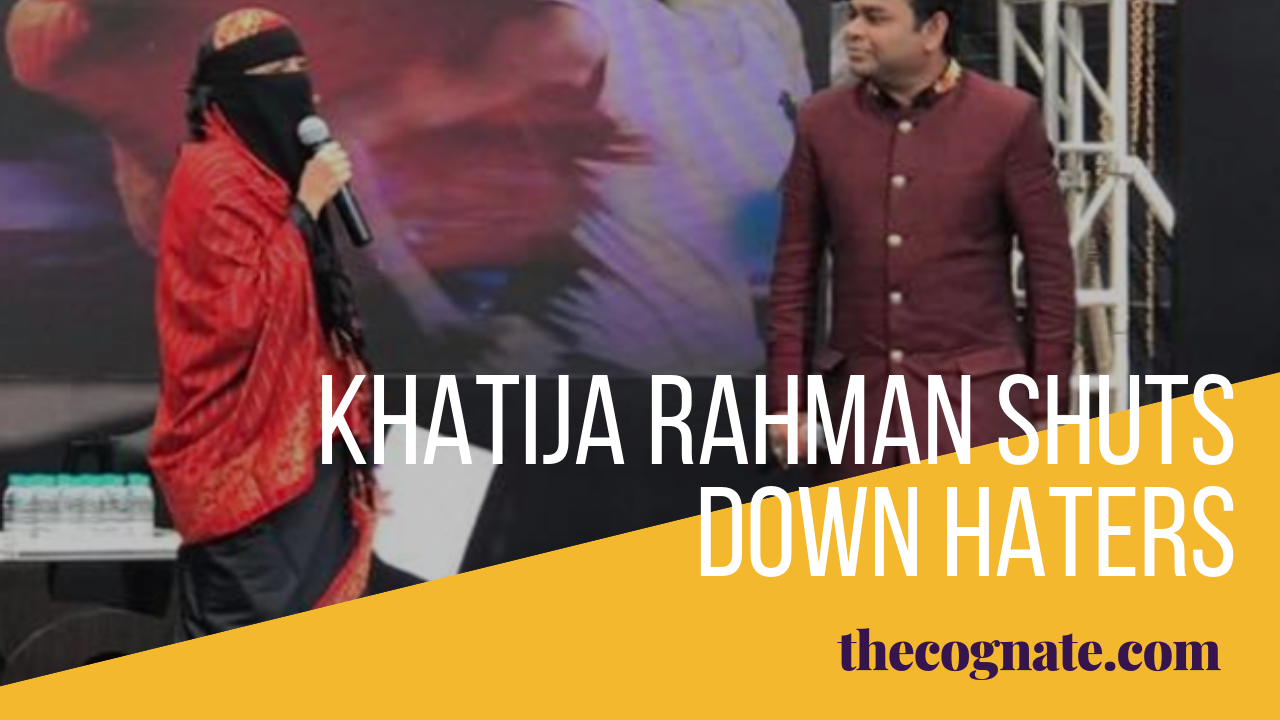 Once again, what a Muslim woman wears, and why has been subjected to the hate debate by die-hard anti-Muslim bigots in India. The latest target of this vicious attack is Khatija Rahman, daughter of Oscar-winning musician AR Rahman.

At a recent event in Mumbai to celebrate 10 years of the movie Slumdog Millionaire; the music for which fetched the composer two Academy awards, Khatija was invited on to the stage to speak about her father and his achievements.

Khatija, who is the eldest daughter of Rahman said that she values her father more for his generosity and kindness towards others than all the awards he has got. She said that she has learned a lot from her father, most importantly, to “pay the laborer his wages before his sweat dries”, in which, she said he follows the Prophet Muhammad (Peace be upon him).

However, as soon as the video of the event went online, Rahman was abused and trolled on social media by haters because his daughter had her face covered, in a niqab. People accused him of ‘forcing’ her daughter to wear the niqab, and even made a mockery of Khatija.

Scroll down to see some of the cringe-worthy comments both father and daughter received:

Proud of his music. Ashamed of his imposition of a medieval tyranny to his new age daughter. Saree and veil don’t go together, they stand for exactly opposition ideas. Saree celebrates womanhood. Burqa/ veil subdues it 10 feet under. https://t.co/PvZx89WQe2

This troll said, if not for the saree, the family does not even look Indian, whatever that is supposed to mean.

When I first saw the images floating on Twitter, I thought it was fake news. But turns out that the shrouded woman interviewing Rahman is indeed his daughter!
Without the Saree and prior info, I would not even place this person and her family as Indian. https://t.co/ux4pOr5AXN

AR Rahman with his daughter. It takes one generation for a Hindu family to follow extreme form of Islam.@arrahman pic.twitter.com/hB8WBZZWWv

This is how it has done…….Feel very sad a Man, a role model to many…. treat her daughter like this…. Extremely hurt with the darkness AR Rahman bring with her daughter. pic.twitter.com/G72DijkE1x

Desh badal raha hai. AR Rahman is a first generation convert and already his daughter is wearing the burqa. The next generation will be demanding to live under Sharia law https://t.co/rc4ML5hqRa

I seriously want to understand &respect AR Rahman's daughter's choice of clothing
But Niqab?Quran certainly doesn’t ask 4it
What kind of conditioning/patriarchal brainwashng convinces a woman that she has to hide something as basic to a human as her face to look modest or pious?

While Rahman responded by posting a picture on Twitter of his wife and two daughters, with his wife Sairaa covering her head with a dupatta, Khatija wearing a niqab, and his younger daughter Raheema without a niqab, it is Khatija’s response to the hatemongers that deserves all the praise and attention for showing them their place.

Khatija said that her veil is a personal choice with complete acceptance and honour. “I’m a sane, mature adult who knows to make my choices in life. Any human being has a choice to wear or do what he/she wants and that’s what I’ve been doing,” she wrote. She concluded by saying people to not make judgments about the exact situations without knowing the facts.