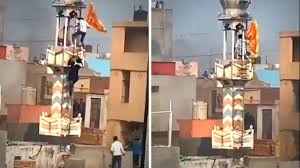 On Tuesday, reports started emerging of marauding Hindu mobs stopping vehicles and asking people their religious identity. Depending on the answers, members of one community were spared while members of the other were thrashed, their papers looted and vehicles damaged. One journalist escaped by saying her surname was “Sharma”.

BJP leader Jai Bhagwan Goyal even lead a rally of tens of people, where he gave a clear clarion call to join forces against Muslims.

In Ashok Nagar, a mosque was vandalised on Tuesday afternoon. A mob shouting “Jai Shri Ram” and “Hinduon ka Hindustan” paraded around the burning mosque, and a Hanuman flag was placed on the minaret of the masjid.

Re-posting this video after verifying its authenticity. It is from Delhi. Men marching on top of a mosque, vandalising it and placing a saffron flag over it. pic.twitter.com/bScgJMxKc3

Torn pages from the Koran were strewn outside the building, which was later picked up two young men.