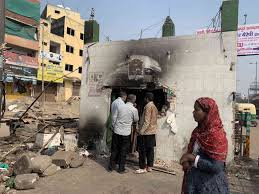 A mazar (Muslim mausoleum) was set on fire in Chand Bagh on Monday.

The Caravan reported the incident as follows: “Amid all the destruction, a mazar—shrine—stood burning at a short distance from a police outpost. A group of around thirty Hindu rioters stood on the Yamuna Vihar side of the road, seemingly enthralled by the sight. One of the rioters shouted, “Hindustan mein rehna hoga”—If you want to stay in India—and the others completed the slogan, “Jai Shri Ram kehna hoga”—You will have to chant Jai Shri Ram. A little while later, one of the rioters began going about offering laddoos to everyone as an acknowledgement and celebration of the burning mazar. Every laddoo offered was followed by a chant of “Jai Shri Ram.””