All India Radio Tweets On COVID-19 In Jharkhand With Unrelated Picture Of A Mosque, Gets Called Out For Islamophobia & Malicious Reporting
Advertisement https://pagead2.googlesyndication.com/pagead/js/adsbygoogle.js 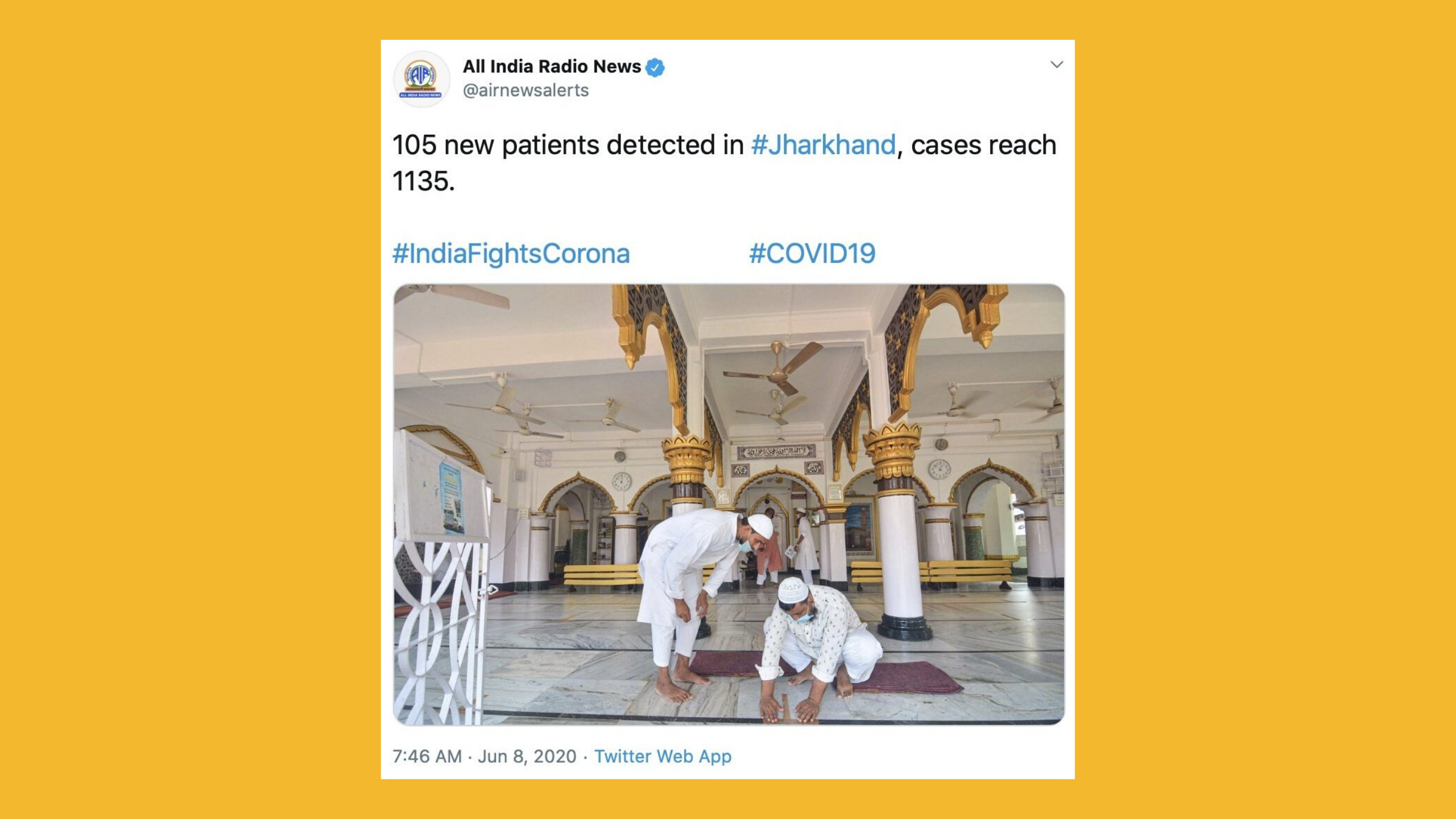 All India Radio (AIR) was called out for its blatant display of Islamophobia and false and malicious reporting after it tweeted a report on new COVID-19 cases in Jharkhand along with a picture of a mosque with skull cap wearing Muslims. The tweet, which is now deleted said ‘105 new patients detected in #Jharkhand, cases reach 1135,’ and accompanied a picture of a mosque, with no connection to either the coronavirus or the state of Jharkhand.

Social media users lashed out at All India Radio’s mischievous attempt to associate the coronavirus pandemic with Muslims and called for police against the national public radio broadcaster.

A picture of Muslims in a mosque put under a completely unrelated negative news by official All India radio. @airnewsalerts

This is Islamophobia.
This is highly objectionable.

Can police file a case against them? pic.twitter.com/2L8P4k8c7X

All India Radio News is writing that "105 new Corona positive patients are found" and put a picture of the mosque … so imagine how much Islamophobia there is in the government channel, private institutions including government institutions… #Islamophobia_in_India pic.twitter.com/Sq4EwzuYIh

What is the relation between this news and the picture All India Radio News?

The country's official radio is openly trying to set the agenda, wow! pic.twitter.com/Pkg9oNvVEJ

Some wanted to know why there is so much hatred against Muslims, and why it is always a particular community which is targeted.

All India Radio News
Why so much hatred against Muslims??

Plz stop this vilification & be accountable.

YES, WE CAN UNDERSTAND IT WAS USED 'INADVERTENTLY'.

Even there is a question: Why does it only happen with that particular community? @ashoswai https://t.co/AnDrEU8mKZ

Some even compared the broadcaster with Radio Rwanda for its tweet.

All India Radio @airnewsalerts or Radio Rwanda? What is the connection of the story and the image? Public broadcaster peddling hate against Muslims. https://t.co/bVe5FWWGFb

That's how radio stations play a role in enabling genocides.

The channel then deleted its tweet without apologizing, and then used the same picture of the mosque to tweet that ‘places of worship, hotels and malls reopen in Assam’.

Also read: The Hindu Publishes Cartoon Showing Coronavirus In Muslim Attire, Takes It Down After Backlash

Twitter suspended the accounts of prominent Muslim pages that were known for being a  collective voice for minority issues in India, particularly Muslims. The...

On March 7, Switzerland goes to the polls to vote on banning the niqab in all public places, in what is largely seen as...