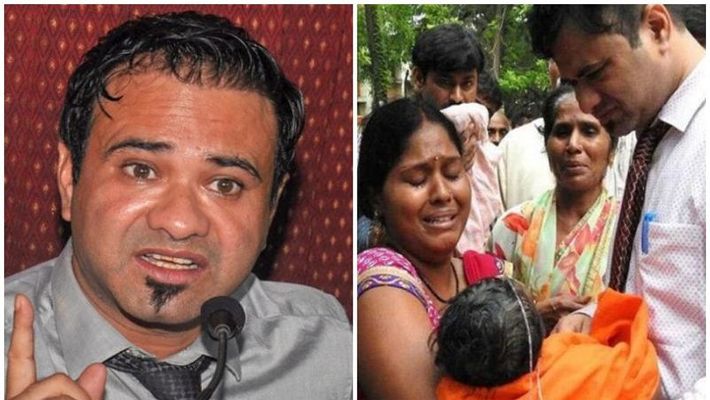 Dr Kafeel Khan, a paediatrician from BRD Medical College and Hospital in Gorakhpur, Uttar Pradesh, who tried to save children in 2017 when the hospital ran out of oxygen, has been finally given a clean chit in the case by the state government-appointed inquiry team. Khan was accused of corruption, medical negligence and dereliction of duty, after more than 60 children died in the hospital due to lack of oxygen.

Now, after two years of hounding him for the crimes he never committed, the state government probe has absolved Dr Khan of all charges as well as commended him for doing everything in his power to help save lives.

In August 2017, over 60 children admitted to the BRD Medical College had died in just two days due to alleged shortage of oxygen in the children’s ward as well as the critical care units.

Initially hailed as a hero, for trying to source oxygen cylinders and bring them to the hospital to save the children, the entire case soon took a political turn, due to massive public outrage against the administration.

The Adityanath-led government suspended Khan, saying that he neither took any action nor warned his superiors about the issue despite being aware of the situation. Later, an FIR was registered against him and he was sent to jail for 9 months. Even after securing bail from the court, Dr Khan remained suspended from duty for 2 years.

Throughout his ordeal, he has reiterated his innocence, saying he was wrongfully suspended and imprisoned. The report by the inquiry team states that Dr Khan was not involved in the process of supply, tender, maintenance, payment or order of oxygen.

The report also says Dr Khan had informed his seniors about the oxygen shortage and had provided the probe officer with call details. Dr Khan also told the investigating officer, the report notes, that he provided seven oxygen cylinders to the hospital in his personal capacity on the night of the tragedy.

Reacting to the report, Dr Khan said he was after two years he had been carrying the tag of ‘murderer’ but now he has been absolved. Over the children’s death, he said, “The real justice would be done when the real culprits are put behind bars.” “I always knew I have not done anything wrong. On that fateful day, I did what I could do best, as a doctor, father and a common Indian. But for my efforts to save the lives of children, I was thrown behind bars, vilified by the media, my family was put through immense harassment and I was suspended from my job,” Dr Kafeel Khan said in a media statement.

Dr Khan says that the entire tragedy was “man-made” and that there should be a real inquiry along with compensation for the families who lost their children. He says that he was made the scapegoat but the real culprits have still not been made accountable. Khan also remains suspended from the institute.

Many on social media reacted to the news, celebrating Khan’s clean chit in the case while demanding that the UP government apologise to the doctor.

This is the basic summary of the report of an enquiry commissioned by the UP govt itself.

The society has reached the stage that while Dr Kafeel Khan tries to save children, procure Oxygen cylinders, he is targeted, and among public there is hardly any anger towards government that was responsible for the mess, not even in Gorakhpur, let alone the state or the country

This is a victory of truth over lies!

My brother @drkafeelkhan suffered a lot unjustly. UP govt owes him an unconditional apology and adequate compensationhttps://t.co/cL80mYBBWv

Congratulations Dr. @drkafeelkhan This is a huge victory. But, this is NOT about Dr. Kafeel. This is an illustration of how easily members of Muslim community can be criminalised, even for doing good! Muslims are deemed criminals unless proven innocent.https://t.co/84kj7SpbMA

On social media, there were many who raised the question as to who is responsible for the deaths of the children.

#WhoKilledOurChildren
After 2 long years, earlier today, Dr Kafeel Khan, has been absolved of all charges against him. The question that arise now is – WHO is responsible for the deaths of these 60+ children? Will the government take responsibility for killing them?

Dr @drkafeelkhan comes under your ministry, he has been absolved by the SC Dated 10/05/2019 of all charges against his name in the BRD Childrens Deaths due to negligence +#WhoKilledOurChildren@priyapyadav18 @Turquoise_trend@HarrisD63432503 @IchbinUjjaini pic.twitter.com/BaGzrC4dgM

A few other targeted the ruling government and the BJP over the arrest of Dr Khan.

Since long time with the support of Godi Media, Yogi Sarkar blaming Dr. Kafeel Khan for their own faults but at the end he proved to be impeccable! Once again proved that #satyamevJayate #KafeelKhan #GorakhpurTragedy @priyankagandhi @SubhashiniAli @yadavakhilesh @Mayawati https://t.co/rEJBpa9oaJ

Is the CM not responsible for the children who die due to govt negligence in his state? #WhoKilledOurChildren