Advani, Conspirator Of Babri Demolition In CBI Chargesheet, Now Cleared Of Charges Along With All 32 Accused
Advertisement https://pagead2.googlesyndication.com/pagead/js/adsbygoogle.js 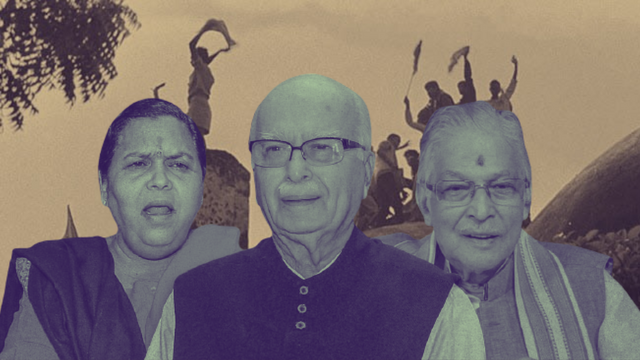 According to LiveLaw, the judge said that the demolition was not pre-planned and the accused persons were “trying to stop the mob and not incite them”. He added that there was not enough evidence against the accused and that the court cannot probe the authenticity of the audio and video evidence provided by the CBI.

Ruchira Gupta, activist and documentary filmmaker who was assaulted while covering the demolition, told The Quint that after she was assaulted, she approached Lal Krishna Advani, who, along with other BJP leaders, was present on the terrace of a house that offered a clear view of what was going on outside. She recounts “I went to him and said, ‘Advaniji, can you ask your people to announce on the mic not to attack journalists, not to attack women.’ I told him I was sexually assaulted. He said, ‘Forget whatever has happened to you. This is such a historic day, celebrate. Here, eat something sweet.”

According to The Wire, a police officer who had accompanied Advani during the day of the demolition told a CBI court in 2010, “On December 6, 1992 Advani made a spirited speech from Ram Katha Kunj Manch, barely 150-200 metres from the disputed site, which charged the people. He repeatedly said that the temple would be constructed at the same site.”

However, on July 24 this year, the Trial Court recorded the statement of Advani via video conferencing. Pleading innocence, he denied his involvement in the alleged conspiracy along with ‘Karsevaks’ to demolish the disputed structure in Ayodhya on December 6, 1992. He pleaded he was completely innocent and was unnecessarily dragged in the case owing to political reasons.

In the wake of Babri Masjid demolition, two FIRs were lodged. The former was filed in an Ayodhya police station immediately after the demolition, naming “lakhs of unknown kar sevaks”. The other FIR named several BJP and Hindutva veterans such as Lal Krishna Advani, Murli Manohar Joshi, Uma Bharti, Mahant Avaidyanath, Vishwa Hindu Parishad (VHP)’s Vishnu Hari Dalmia and Ashok Singhal for making provocative speeches leading up to the demolition. However, unlike the first FIR, the conspiracy charge was missing in the second.

On August 27, 1993, the case was handed over to the CBI by the UP government. The CBI filed a joint charge sheet on October 5, 1993, citing 40 persons as the accused. This included prominent leaders of the BJP, VHP, Shiv Sena and Bajrang Dal. But the conspiracy charge was dropped against some of the Hindutva leaders.

According to the CBI charge sheet, Advani was also present at a secret meeting on December 5, 1992, at Vinay Katiyar’s home where the final decision to demolish the mosque was taken. He has been named by the CBI as a conspirator in the criminal case of the demolition of Babri masjid.

The Supreme Court had fixed September 30 as the deadline for the trial court to pronounce its judgement in the nearly three-decade-old case.

Special judge Surendra Kumar Yadav had asked for all the accused to be present in court. However, only 26 of the accused were present, while Advani, Joshi, Bharti and Singh were not. While the Advani and Joshi were excused due to their age and concerns that they may contract COVID-19, Bharti is in AIIMS after she tested positive for the coronavirus. Nritya Gopal Das too was not present in the CBI special court. They did, however, attend the proceedings via a video link.