A Gang Of Terrorists Beats Up Muslim Family In Gurgaon For Playing Cricket
Advertisement https://pagead2.googlesyndication.com/pagead/js/adsbygoogle.js 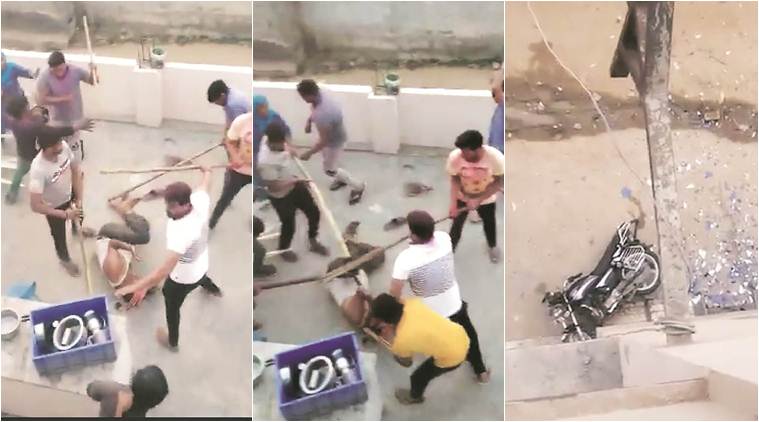 A Muslim family was mercilessly beaten with iron rods and hockey sticks, and their house was pelted with stones by a gang of terrorists in Gurgaon’s Dhamaspur village, on Thursday.

A video showing members of a Muslim family, including women screaming for help in fear as the terrorists with rods and sticks barged into their home, emerged on social media.

The assault took place at the home of Mohammad Sajid who lives with his wife and six children in Gurugram’s Dhamaspur village. The family came under attack after the terrorists approached the boys from the family, who were playing cricket outside, and demanded that they “go to Pakistan and play”.

According to The Indian Express, in the complaint, Sajid’s nephew Dilshaad, who was among those beaten up, said “Two unknown men came on a bike and said, ‘What are you doing here? Go to Pakistan and play’. They began fighting and when my uncle Sajid intervened, the boy sitting at the back of the bike slapped him and said, ‘You wait, we will show you’,” he alleged in the police complaint, adding that 10 minutes later, they saw six boys on two bikes and several men on foot approaching their home, armed with “bhalas” (spears), “lathis” (sticks) and “talwars” (swords).

“On seeing them, we ran into the house, and they all began demanding that the men come out or they will kill us. When we did not go out, they forced their way into the house and started beating us up,” he alleged. He said that the gang warned the family to “empty the house and leave or else we will capture it”.

Police have registered cases under attempt to murder, criminal intimidation, among other sections, against the accused.

The attack shows the worsening situation for Muslims in India, under the current political dispensation. According to Amnesty India, in 2018 alone, 218 cases of hate crimes were reported in India, of which 50 such incidents were against Muslims.

Meat Shops In Gurgaon Ordered To Close On Tuesdays, Because Of ‘Hindu Sentiments’

The Municipal Corporation of Gurgaon (MCG) has ordered meat shops to close down in the city every Tuesday, after some councillors put forth suggestions...